Dating and sex advice from a real bitch.

Q: Hello sir, I grew up in a really traditional family (we went to church on weekdays!) I’m excited about the whole end of DOMA etc, but still, even now in my late 20’s I find it hard sometimes to feel proud of being gay. It’s like I was in a cult for 18 years, and now that I’m away from that world, I’m happier, but still can’t completely shake some of the things I was taught — that I’m going to hell, that gay sex is unnatural. Any advice to get over those feelings?

A: Hey Clay Aiken, Sir? No, please, call me Bitch. You sound like a real sweetheart. Self loathing is a real bitch, huh? Like, a legitimate bitch. Not a snarky, witty bitch with funny quips here and there. Just a really lame, shitty fucking bitch. Self hatred is like the close cousin of that one completely useless emotion: worry. When have you ever used worry to command positive change to your surroundings, situation, or yourself? Yet it’s the most overused emotion. Like most other “young adults” I worry about bills, sex, my tone in text messages. In the end, I know that it’s all going to be OK because I am not a complete moron. The bills will get paid, sex might happen, and I will never really know how to use text messages for anything positive. It gets (sort of) better.

My only solution to offer you is: Going forward, do not waste any amount of time worrying yourself with others opinions, especially those who think you’re going to hell regardless. It’s fucking 2013. The Kardashians are considered American royalty. Probably all of America is going to hell just for allowing that fact to slide. Now to focus on the positive. Almost everything about the gay experience is being rewritten every day, so trying to live up to anyone else’s dated ideals will only make you more miserable than they already are. The next phase of gay history is for us to come to terms with creating a culture that is both livable and comfortable. In other words: YOU DO YOU. A wise woman once said “If you don’t love yourself, how in the hell you gonna love somebody else?” Happy pride?

Q: Dear Bitch, I lost my car keys…up my butt! hahahah. Just kidding, but now that I got your attention, I’m wondering if I can get your opinions, you have a lot of them, just like arseholes. Anyway then, where are your views on this new craze of sleeping with a married man, there’s a show about it on TV (Mistresses) don’t you know? I am doing this with a girlfriend’s husband that I have known since college. She can act like the bitch sometimes, so I don’t feel bad, and he is as horny as a dog in the spring of puberty. And clearly he is repulsed by her body and in love with my male form. I’m I in the wrong, making love to him when she is at work? Being naughty makes the sex feel explosive hehe. Like volcanos. Help!

A: Hey Alicia Keys, I never ever thought I would say this to another human being, but you watch way too much TV. I looked up that “Mistresses” show you mentioned, and I am not a fan in the least. Mainly because it’s a scripted show about fictional situations where these women sleeping with other people’s men are the protagonists. I swear, hoes are really winning in 2013.

I much prefer the show Cheaters. The basic premise of that show is they would fill an Astrovan with a camera crew, the show’s host, and a woman who thinks her husband is cheating. Essentially, they would follow the man and mistress around for awhile and then they’d roll up on them in the parking lot of Bennigan‘s and let the woman beat the mistress and her soon to be ex’s ass on camera. My favorite TV drama.

Anyways, about your situation… I could totally see how her acting like a “bitch” would validate you sleeping with her husband (that’s a joke). Don’t call this person your girlfriend, because she’s clearly not someone you consider a friend. To be honest, the guy you’re sleeping with sounds even more confused than you are, so I do wonder what you think you’re getting out of sleeping with this man (I mean besides being a fucking volcano or whatever the fuck you’re talking about?) Do you think you two will end up together if he ever ends it with her? If you did, to which degree of pure garbage do you think that relationship would function like? A brand new gay paired with an old time man stealer that treats his ass like a clown car and his “friends” like shit. That sex would be dumb too. I swear, there is not enough money in the Scrooge McDuck vault to make me ever want to be someone’s first boyfriend again. Ever.

But sis, you sound headstrong about being on this “Mistresses” show you’re talking about, so go ahead you fucking mess. I should beat your ass just for bringing this drama to my email account, but instead I’ll just wait for your girlfriend to go on “Cheaters” and find out her husband’s giving you the D. Good luck with that. 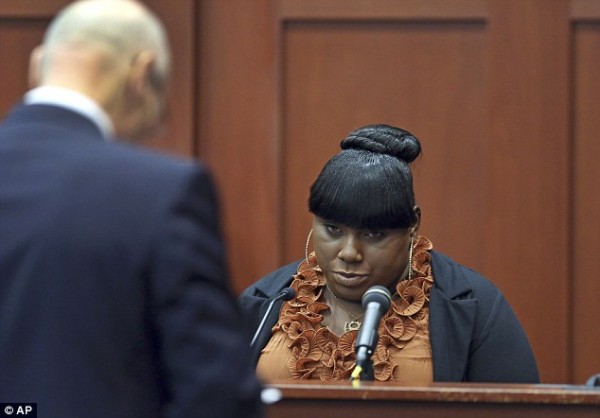 This week’s freak is Rachel Jeantel, Trayvon Martin‘s friend and witness #8 in the
trial of George Zimmerman.

I really knew it from the second she strutted into the courtroom looking like Precious 2.0 in a ruffled tangerine blouse and matching acrylic nails (I know because she tweeted a photo of them) that she was special. That salon up do, those blunt Chinese bangs, those orange nails, that sharp roll of her eyes with every question, the way she finishes every single sentence with a stern “SIR”.  And I know many of you are hating on her orange blossom top. I probably wouldn’t look past Strawberry’s either if I knew I was going to sit in a stuffy courtroom with a bunch of tired ass middle-aged attorneys, asking these tired questions, and making these knock knock jokes during the opening arguments of a monumental trial. Love you Rachel Jeantel.