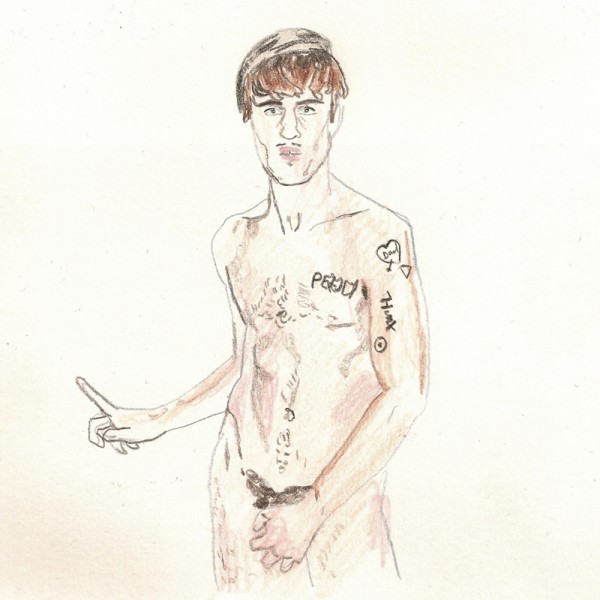 An Evening of Sweat, Sound and Sin.

The shambolic night begun at The Levee in Williamsburg, not far from the concert venue, we had whiskey and a chance to shoot virtual deer in Hi-Def. I was drinking with the up-and-coming queer DJ duo BE2GAY talking about working illegally and stolen Metro cards. It was raining and my partner for the evening, Dan, was wearing a white linen t-shirt with socks and sandals. The weather wasn’t working in his favor as we left for 285 Kent. We had to run if he wanted to maintain his presentable get-up. As expected Hunx and his Punx could not care less about our presentability, it was the least of their worries. They would’ve done the interview if we were wearing stained hoodies and torn underwear. These guys are down to earth — more so than me and I’m not the one with a sold out show at one of New York’s top live music venues. I’m also not the one with a legion of gay youth trying to get into bed with me. (Why is my ego so blown out of proportion?) Hunx did point out that I am an Aries, which means I’m young and confident, maybe I’m just immature and arrogant?

Let me take a moment to provide Kaitlin Browne of 285 Kent with a well-deserved shout out for getting us into the sold out show — she’s a friend to all flustered homosexual journalists. I thank you kindly… you saved our story.

Once we made it into the jam-packed venue we made our first face-to-face contact with Seth Bogart, the one and only — Hunx. I had been in technologically educed contact with Seth for about 4 days prior and by contact I mean persistent text messaging. This show was the first stop on their national tour so obviously they were extremely busy and pressed for time with rehearsals, organizing merchandise, finding a van etc etc etc. The band is a band of kind souls and they were terribly accommodating to us, which we are wildly thankful for. I asked him to let us know when he and fellow band mates, Shannon Shaw and Erin Emslie, were ready for a chat. While we waited we were lucky enough to catch Juan Wauters (The Beets) and Carmelle Safdie…truth be told, I’ve never missed a show of theirs — they kill it, every time. James Brown runs through their veins.

Four whiskeys already and I’m still walking straight — something is wrong. Sometimes I think music activates my brain too much; it’s hard to get floppy armed if you’re spending the night with not one but three phenomenal bands — nights like these tend to lead me into states of complete and intensive concentration. To solve this issue I walk back up to the bar in an attempt to loosen my muscles and my mind, Hunx is there and says “Hey, do you want to do the interview now?” — to which I replied “Yes, of course,” the loosening of my muscles and mind will have to wait for now which I couldn’t be happier about. It’s not every day that you can just wander outside and chat with one of your favorite bands but whiskey… whiskey is always there.

First things first, I was really curious to know what it was about Steve Irwin that caught the imagination of Shannon Shaw. I watched an episode of the web series American Music with Shannon and the Clams as the subject. In this episode which you can watch here, you can see Shannon working on a wonderful and beautiful portrait of Steve Irwin, in a frame of crocodiles. Shannon said to me that she really admires his passion for educating people “he’s really passionate and excited about what he does, which I think is really cool.” Oddly enough Hunx and I later discussed the educational qualities of their music — the homo youth need to know about The Germs and Lydia Lunch, to which he replied “We’ll teach them”. I then asked if there was any chance of a no-wave record, like Lydia Lunch, considering they’ve moved into a more hardcore sound now; following the trajectory of the original punks — no-wave would be next, no? Hunx didn’t seem overly excited by the idea of a no-wave record “Maybe we’ll do a yes-wave record” he said…that’s an exciting prospect. While still on the topic of no-wave Hunx did confess interest in a spoken word album. “I’m really into spoken word but I don’t want to drag them into it,” he said while looking up at Erin and Shannon.

I then told the band how I heard of them; it was through the one and only Nardwaur, without question the best music interviewer of all time — he knows all. Once the name Nardwaur was stated Shannon, Erin and Hunx all tensed up and gasped. “Oh my god, no” — was the response I got from Hunx, “I can’t watch that interview, it was awful. I was going through eclipses”. Erin then said to me that it was really uncomfortable because two members of the band were leaving, Amy Blaustein and Michelle Santamaria. You can check out the Nardwaur interview here, much to the dismay of the band; I’m sure. If you’re reading this Seth, Shannon and Erin — I’m sorry, I’m addicted to Nardwaur. Then I asked Erin about her old band The Time Flys and apparently I was the third person of the day to bring that up, much to her amazement. “Maybe there will be a one person reunion” she responded, I hope so!

Over the course of our conversation I learnt that Hunx is really excited about their 90s phase, that Jugallo’s have really scary haunted houses and are really nice people, that Aries and Pieces make a great team, that in L.A people are tan and wear pajamas out, that even though New York is the birth place of punk we’re all a little uptight and dressed up, that Erin should move to L.A because of her hair, that Shannon was the runner up at Homecoming, that Hunx was not prom king and Erin was not prom queen — I also learnt that Seth is a big Patti Smith fan and she’ll appear on Vol.02 of the Girls All Over Me t-shirt. Shannon and I also talked about the wonderful Oakland band, Twin Steps, check them out here. The band then had to leave so Hunx could change into his Peggy Noland ensemble — plus Chain and the Gang had started their set and they should never be missed.

Chain and the Gang — the first anti freedom rock and roll band. “We all see what freedom did. We’re enduring freedom right now…that’s right.” Holy shit this band is tremendous. I had only heard their tunes that are available on Bandcamp and had no idea that they were this incredible. Ian Svenonius is a genius and luckily enough I got to meet him too — he’s really sexy. 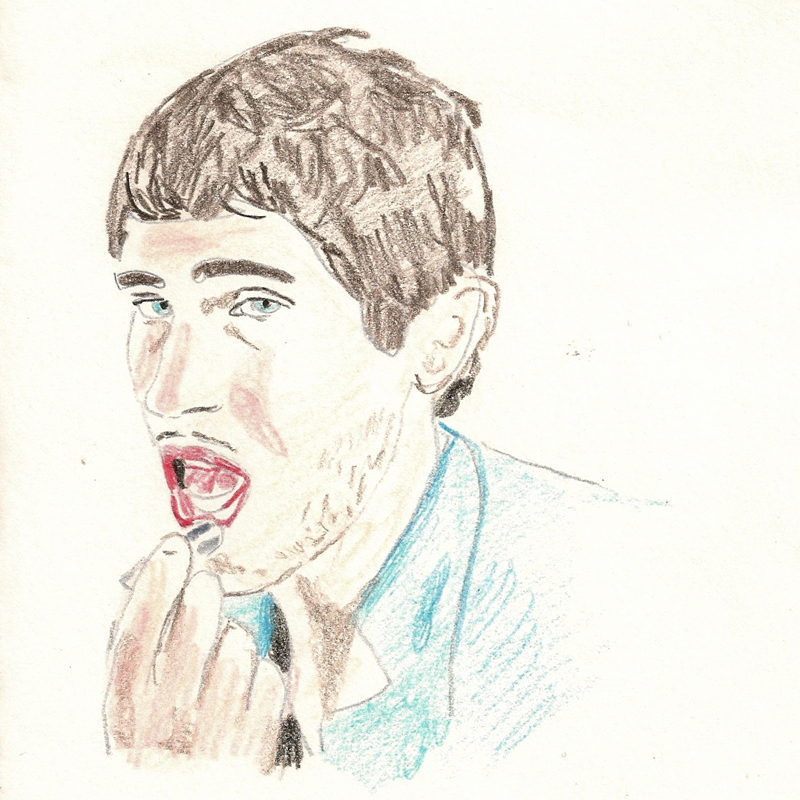 By this time Hunx and his Punx were about to start playing, my muscles and mind were finally loose enough to relax. Once they arrived on stage I notice a fourth member — guilt came over me instantly for not including him in the interview. I didn’t know there was a new member in Hunx and his Punx — thanks Wikipedia, you fucked up my conscience. Was his name Mikey or Mickey? The sweaty elbow of a stranger was jammed into my ear so I was a little bit hard of hearing — so punk. Hunx then declared that they would not start playing until they had ten shirts from the audience on stage, a mere 15 seconds passed the deed was done. “This ones called Bad Skin”…then shit got real. I’ve seen hardcore punk legend Jello Biafra play live twice and the mosh pit at his shows couldn’t hold a candle next the mosh pit at this show. I was instantly drenched in sweat and it was wonderful. Hunx has an intense amount of control of the audience — boys just stare at him and hang on his every word.

Being at a Hunx and his Punx show is kind of like being in a communist country — there is a lot of red and one man with god-like command over his citizens. If Chairman Mao sucked dick I’m sure this is what it would’ve looked like. The band continued to race through many songs from their new album and the crowd continued to act like wild animals. At one point in the show Erin was put on blast for being the only single member of the band (the reaction of the gay boys was priceless, they all came for a kiss with Hunx and now their dreams were crushed, mine too). Hunx then asked if there were any straight men in the audience for Erin, a lot of hands rose up. Oddly enough most of the guys who were so eager to throw their shirts at Hunx were the straight ones — they were all suspiciously excited to be shirtless and all on top of each other covered in sweat…..curious.

At times I was hypnotized by Shannon’s beautiful eyeball pin but I was swiftly pulled back down to earth by the song Everyone’s a Pussy (Fuck You Dude) — which they played three times thankfully. The mosh pit did calm down for one humble moment of slow dancing to Lovers Lane, the animal cage-like sense left and prom vibe took over — then the cage returned, without question. Before the band played any song off one of their older albums, including Hunx’s solo album, Hunx would make a statement that minimized the songs like “we’re gonna play another stupid one” etc — I think their new sound is a true reflection of how they’re feeling. They’ve turned hardcore for real, not for fun… it’s magnificent.

The show as a whole was mind bending and perfect. There was an unexpected quantity of vaginal juices in the crowd thanks to one girl getting fingered in the mosh pit. There were beer cans being thrown all over the place. There were many crowd surfers and even a girl vomiting right by my feet. It’s a punk show — what do you expect?

If you were foolish enough to miss this gig; you can’t make it up to yourself by attending their next New York show at Death by Audio in Brooklyn on August 24.