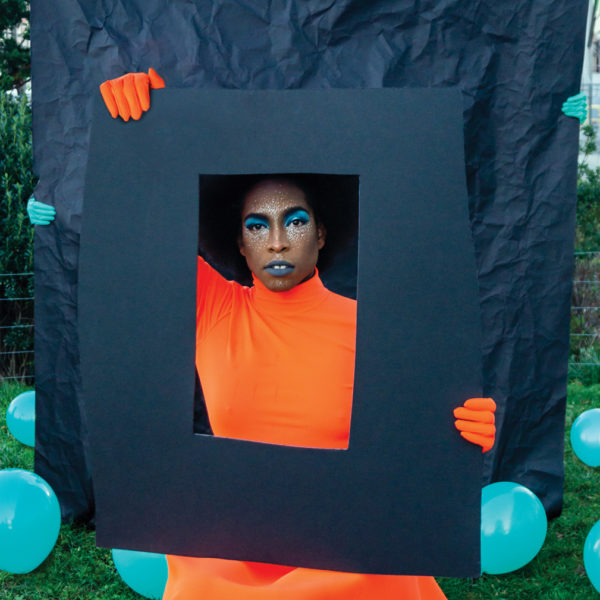 Before the shutdown, Junior Mintt was one of the most booked and busy queens in the New York and Brooklyn drag scene. Junior likens her shows to “queer church” full of “confetti, balloon pops, laughter, costume reveals, comedy mixes, motivational speaking, political statements, great music, and above all respect!” We connected with Junior to discuss her love of candy, the beauty of Black trans power, and who she looks up to the most.

What’s the story behind Junior Mintt and her rise? I wouldn’t necessarily say there was a “rise” to Junior Mintt, I prefer to think she was with me from birth. Junior Mintt is the piece of me that kept me going and kept me seeing my own worth when I didn’t think I was worthy of love. Being trans you’re born into a world that reminds you everyday it isn’t meant for you, so growing up I internalized every hurtful thing that everyone would say. From being very overweight to my femme personality to being too nice, Junior Mintt was the voice in my head reminding me that just because I don’t fit in here doesn’t mean I don’t fit in anywhere. Junior Mintt was always there and always knew who I was, it’s just a matter of me getting to know her now.

Where does your name come from? My name outside of drag is Junior as well, and when I started drag, I knew I wanted to use my real name. I started off as Junior High, and then when I was rewatching the Seinfeld episode that’s all about Junior Mints, I remembered that growing up my mom would call me her little Junior Mint, and that was the moment when it clicked! When I called my mom to tell her the name, she said “chocolatey in your mouth, minty going down” and it’s been the catchphrase ever since.

Are you a candy lover? I’m not that big of a candy lover, but when I do indulge, it has to be CHOCOLATE — Junior Mints, Reese’s Cups, Hersheys!

You often use balloons in your drag; what’s the significance? Well I always wanted to be the little Black girl in elementary school with all the berets and beads and colorful balls in her hair, the girl that you can hear coming down the hall before you see her and her light-up sketchers. So when I saw balloons one day, I just got inspired and was determined to use them. Ever since, the balloons have been a way for me to not only be that little Black girl, but also to be that BITCH! Plus, I absolutely love how balloons are so approachable for anyone, the amount of times kids have seen me on the street and run up to see all the balloons in my hair — honestly, it happens with quite a few adults too, and I love it just the same lol. 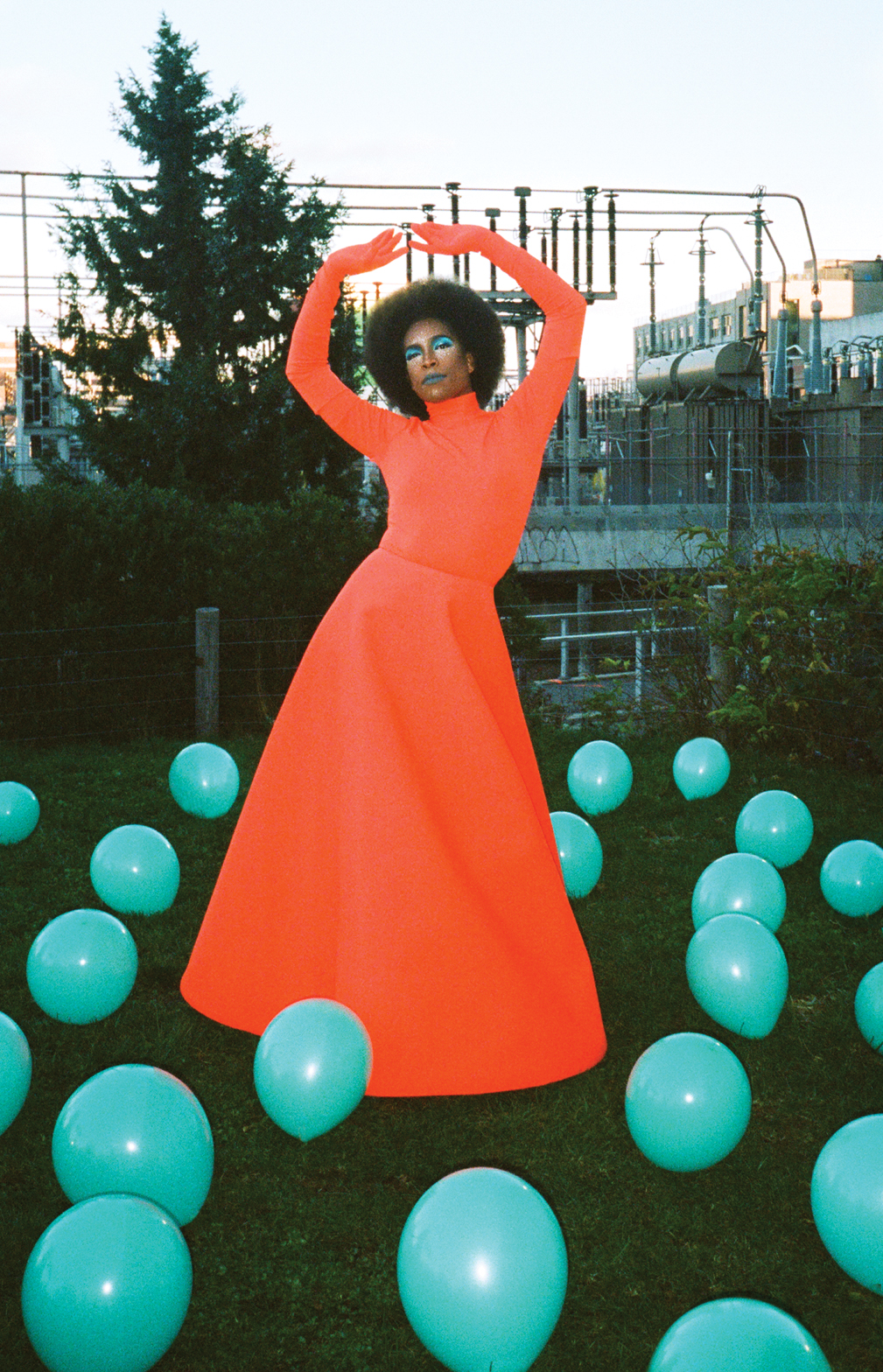 What has been your relationship with your hair over the years? How has your style changed? Well before college, I didn’t really have a relationship with my hair, it was shaved and simple. But when I moved to college in downtown Boston, there weren’t many places that cut Black people’s hair close to my school. So I began to grow it out, and the more it grew, the more I loved it. My hair feels like a connection to the beauty of my ancestry and all the people in my family who came before me, but also a connection to the strength of my ancestry. I like my afro. I get to look in the mirror and feel like Angela Davis.

What should an audience expect from a Junior Mintt show? When it comes to a Junior Mintt show, first and foremost you can expect BLACK TRANS POWER! But you can also expect confetti, balloon pops, laughter, costume reveals, comedy mixes, motivational speaking, political statements, GREAT MUSIC, and above all respect. Think of it like queer church! Every show, I’m armed with love, laughter, and accountability because whether you’re in the audience, on the stage, behind the bar, or working the door, you are a part of the community, and you have a role in keeping this space safe for Black trans people. Oftentimes Black trans artists are just used for entertainment without any regard for their lives and safety, and as a community, it is our duty to look out for one another, to protect one another. So if you come, know the standard at every Junior Mintt show means that even the audience has a responsibility to creating a space rooted in Black trans power. You don’t get to just throw dollar bills and leave. It is church afterall!

Where is your favorite place to perform? I don’t really have a favorite physical space, but for me it’s anywhere there are people who are excited to share themselves during the performance. There’s nothing better than watching someone truly be in the moment with you during your number. For me that’s the best. It could be at a senior citizen’s home or a kid’s birthday party. If they’re living, then I’m LIVING!

What is your biggest vice? What could you not live without? My three biggest vices are definitely smoking a lot of weed, everything Mariah Carey-related, and watching reality TV — together, it’s a dangerous combo. If you don’t watch Real Housewives of Potomac or Atlanta, are you even really living?!

Real or fictional, who are your role models? In general, my role models always trace back to Black women and Black queer people who truly opened doors for generations after them while still educating and sharing their wisdom of the past generations. More specifically, my mom is the single greatest person this world has ever seen or will ever see! Also, people like Marsha P. Johnson, Miss Major, Toni Morrison, Eartha Kitt, Angela Davis, Assata Shakur, James Baldwin, Zora Neale Hurston, Aretha Franklin, Mariah Carey, Ruby Dee — just to name a few! Also, I do have to give a mention to every character on Star Trek! I’m a hardcore Trekkie. I’ve seen every iteration #livelongandprosper. 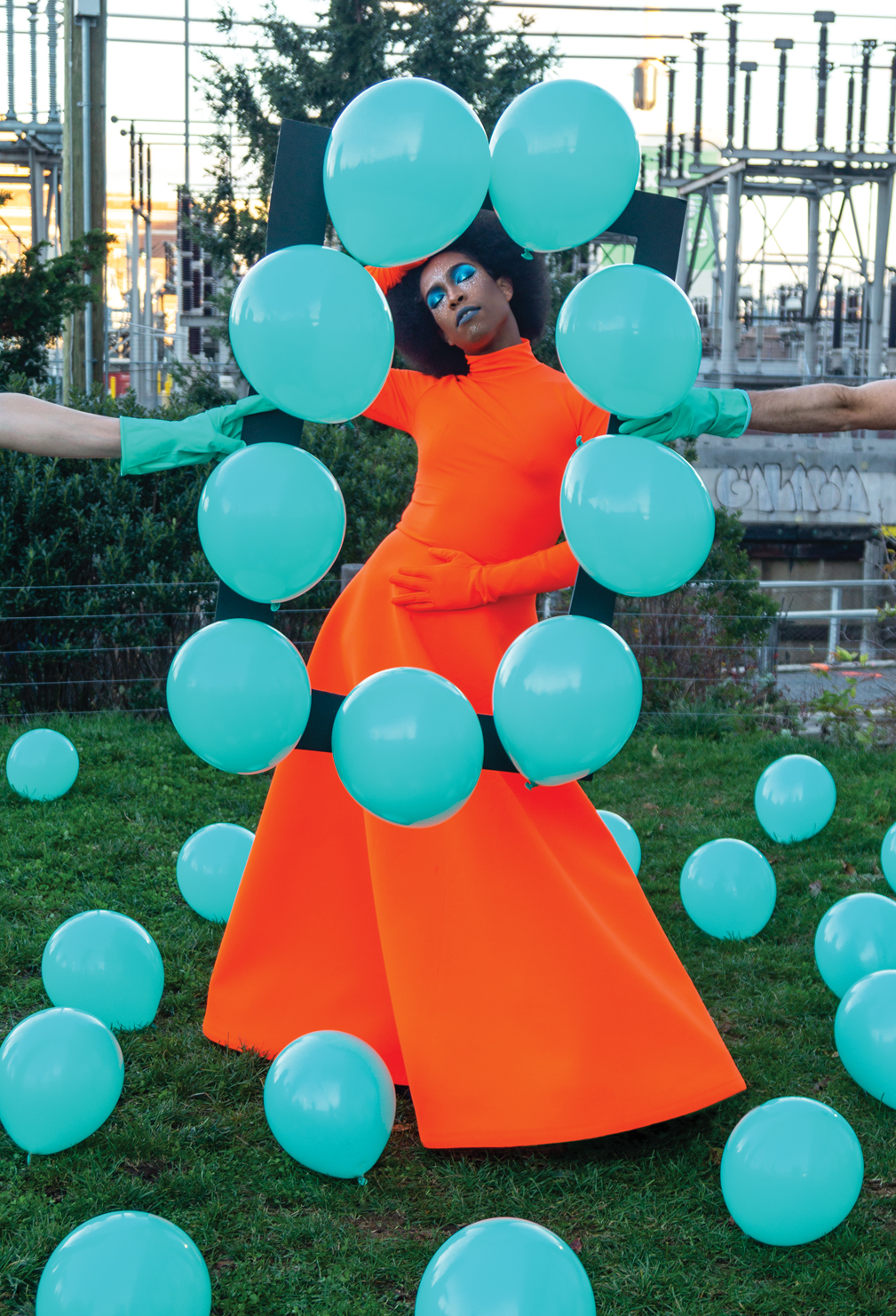 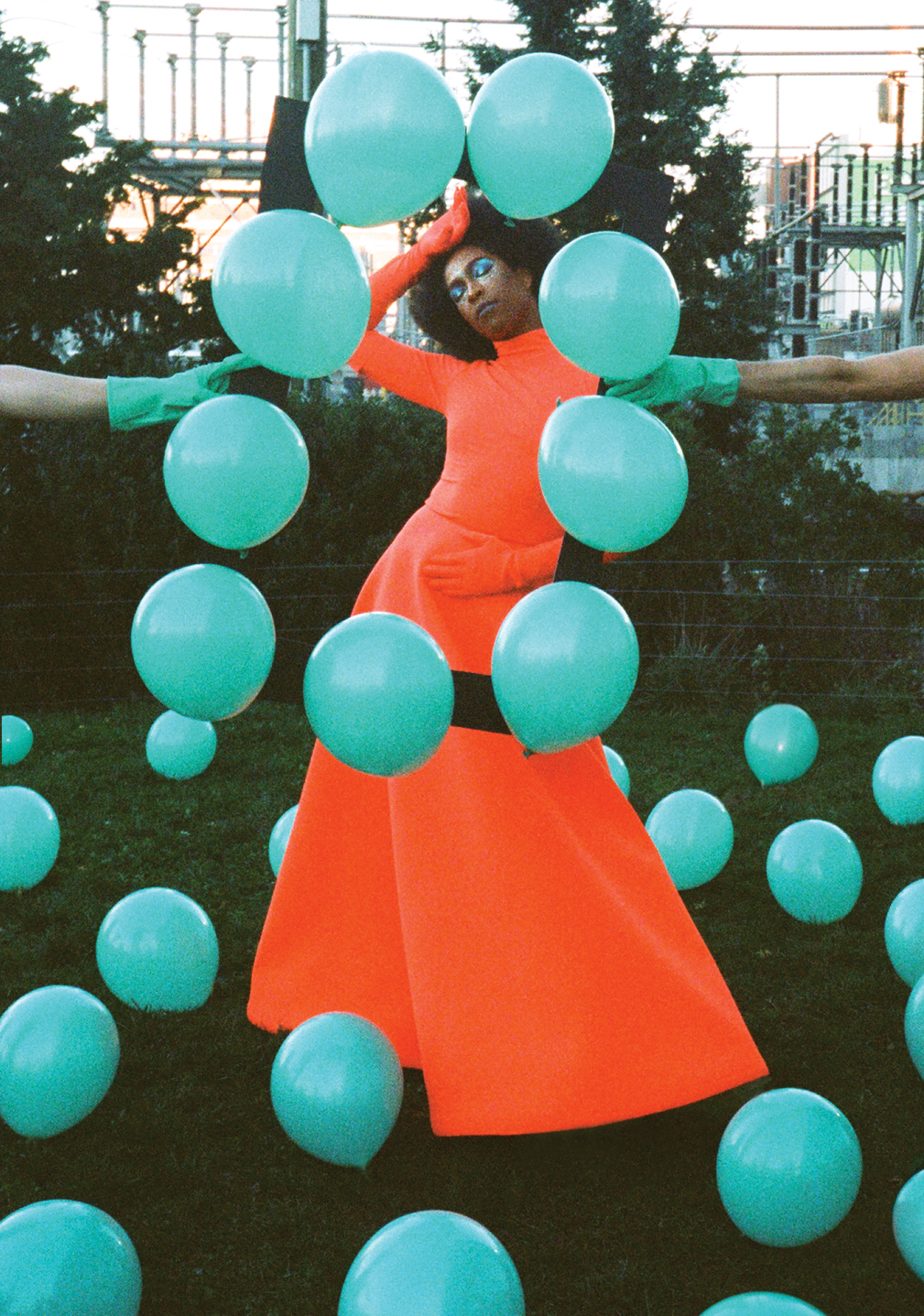 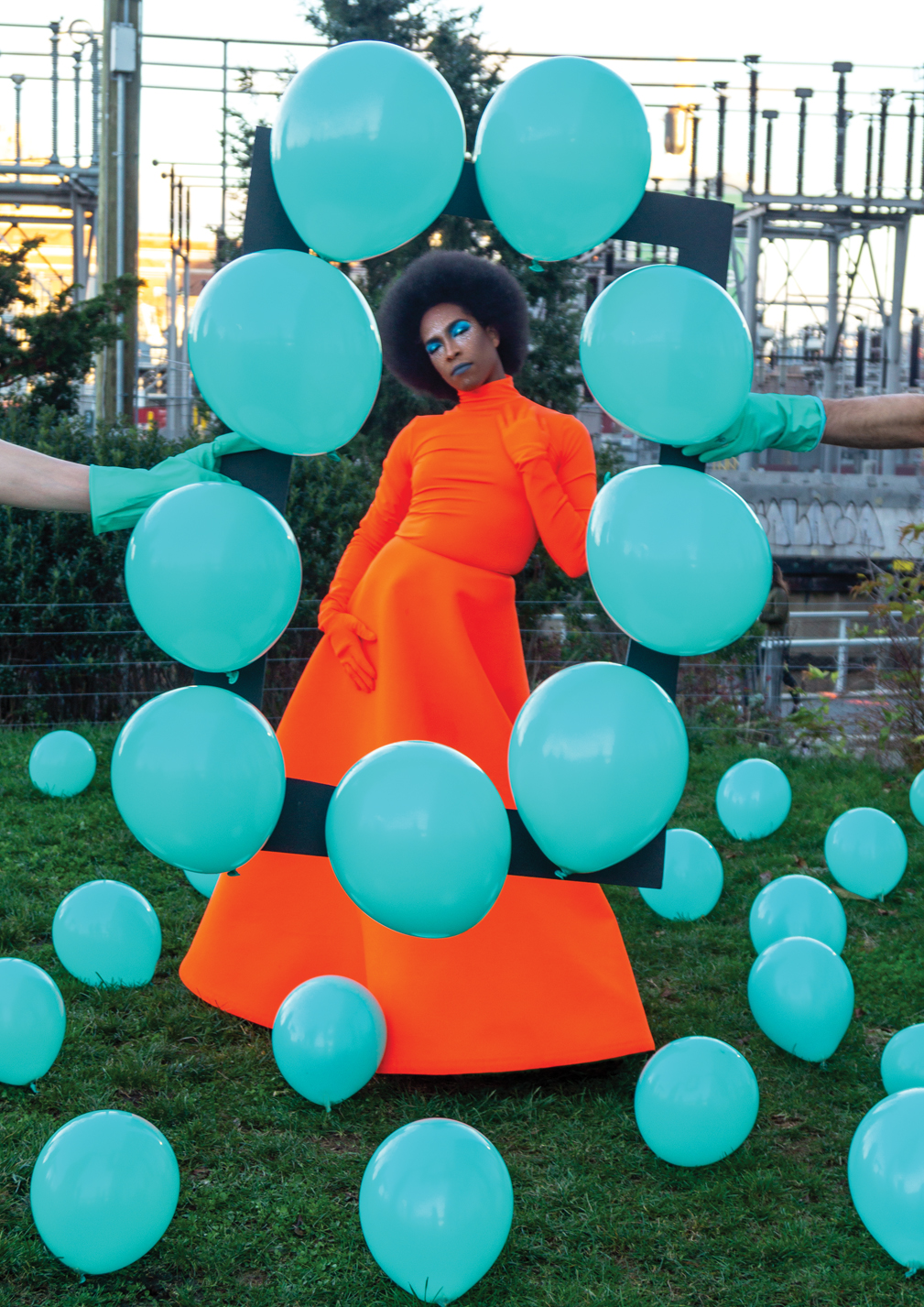 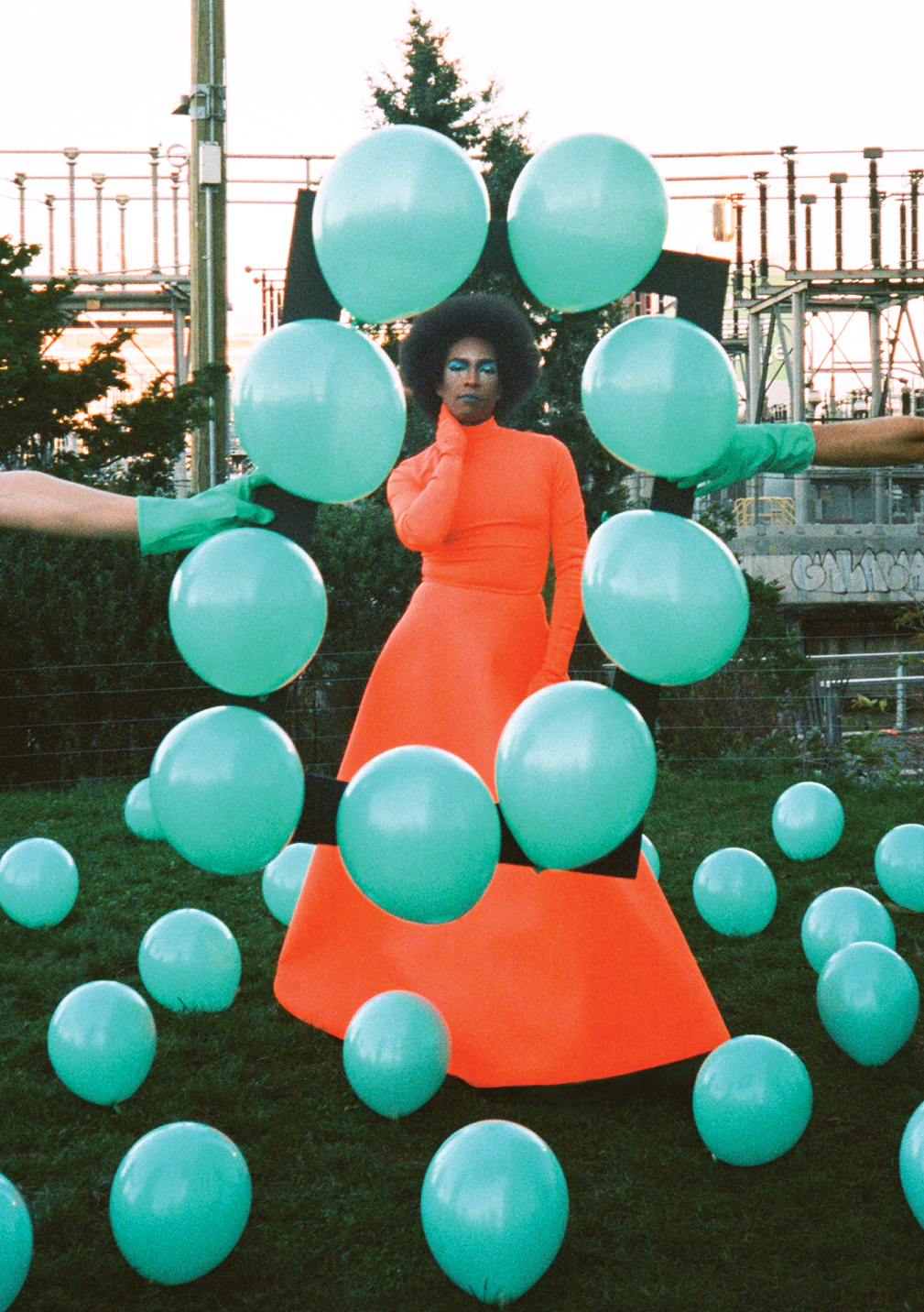 Do you see drag as activism, as inherently political? Everything is political, it’s just a matter of whether you choose to acknowledge it or not. My existence as a Black trans person is political because we live in a country that views me as a piece of property in its constitution and that never truly outlawed slavery, just substituted it for peonage and prison labor. When the system you live in says you shouldn’t exist, your existence inherently becomes a protest. So yes, drag is political. The history of this country is the history of the continued erasure of queerness and queer history, it’s the history of creating a rubric for gender, so taking up space, and saying that ‘gender is whatever the hell I want to make it’ is a protest!

How has making art, performing, and creating content changed for you while in quarantine? It’s been an interesting process of adapting to quarantine, just simply trying to figure out space and lighting, but also juggling depression. I think it has led me to doubling down on what brings me the most joy: connecting with people. I tried recording videos of numbers early into the quarantine, but I realized I was forcing my way through it, and it wasn’t actually turning out to be much fun, so I leaned more into direct-to-camera addresses that have reinvigorated my creative energy. It’s led me to creating my own podcast “Mo-Mintt of Truth” and it has also gotten me into turning the poetry that I write into music, which I’m going to release next year! So for me it’s been a journey, but one that I’ve learned and grown a lot from.

How do you think the pandemic has changed you and the queer community? I think this pandemic has definitely changed me and the queer community in a lot of different ways. I think we are all going to have a newfound love and appreciation for our community and how blessed we are to have one another. I also think that when we are able to be within six feet of each other again, I think that everyone will also have a more Black trans power-oriented intent when it comes to producing and booking shows. In addition, I think the quarantine has knocked down doors in terms of making drag far more accessible. Not only because anyone with access to internet can see a live drag show, but also numbers can be closed captioned for those who need it! Being queer, we inherently know how to make something out of nothing, and I hope that as we move forward as a community, we remember to not go back to where we were, but to move forward to where we want to be.

What organizations or institutions do you think are currently helping to create a better world for Black trans people? I would definitely have to say the G.L.I.T.S. Inc., Femme Defense Fund, Black Trans Travel Fund, Marsha P. Johnson Institute, Emergency Release Fund, Black Trans Femmes In the Arts — just to name a few! But make sure that your search for how to help Black trans people doesn’t end with organizations. Make sure that you’re looking for GoFundMes and smaller community activism. Society will never make it easy for you to find the Black trans people who need help, so make sure you’re doing your own due diligence.

What are your goals or aspirations? Where might we see Junior Mintt in the future? My ultimate goal is to be a mom tbh, and to share the abundance of unconditional love and wisdom I have in my heart with children. But workwise, I see myself touring, walking runways, hosting a talk show, releasing music. I want to keep finding new ways to connect with my community and open doors for Black trans people while getting to find new ways to express myself. So in the future you will see me on TV and on your phone screen, you’ll hear me through your airpods.

Where are you happiest? I have to say it’s a tie! My introverted half is happiest when I am in bed, cuddling a body pillow, smoking weed, watching Star Trek or Real Housewives, eating Chinese food, and turning off my phone. But my extroverted half is happiest while being surrounded by queer and trans people, watching a drag show, and feeling the connection between everyone. Whenever I feel that connection, it reminds me of being a little kid, and I think of when I decided that I wanted to move to New York City because I knew I could be myself there. And it gives me so much happiness to know I found my people. 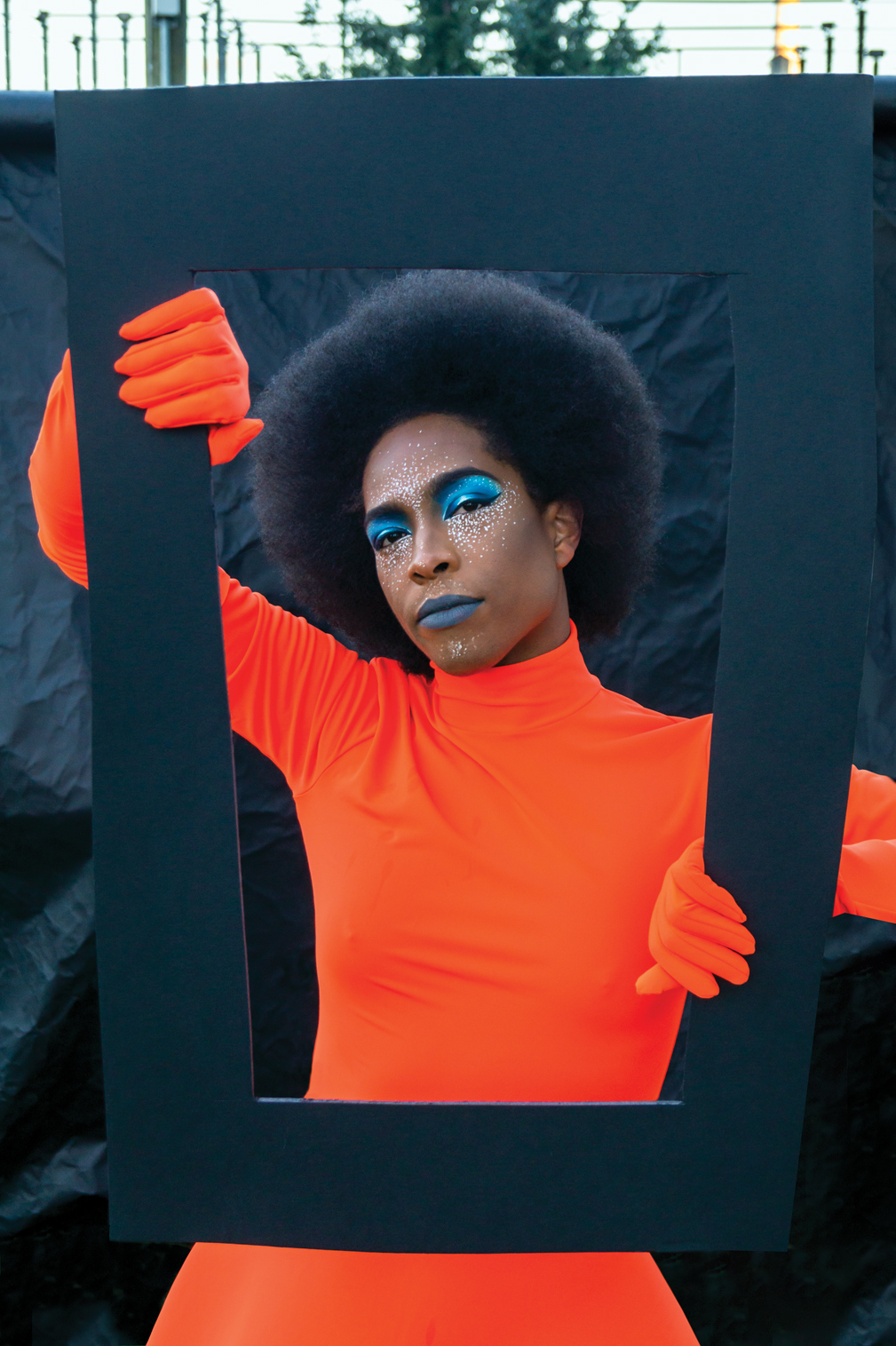 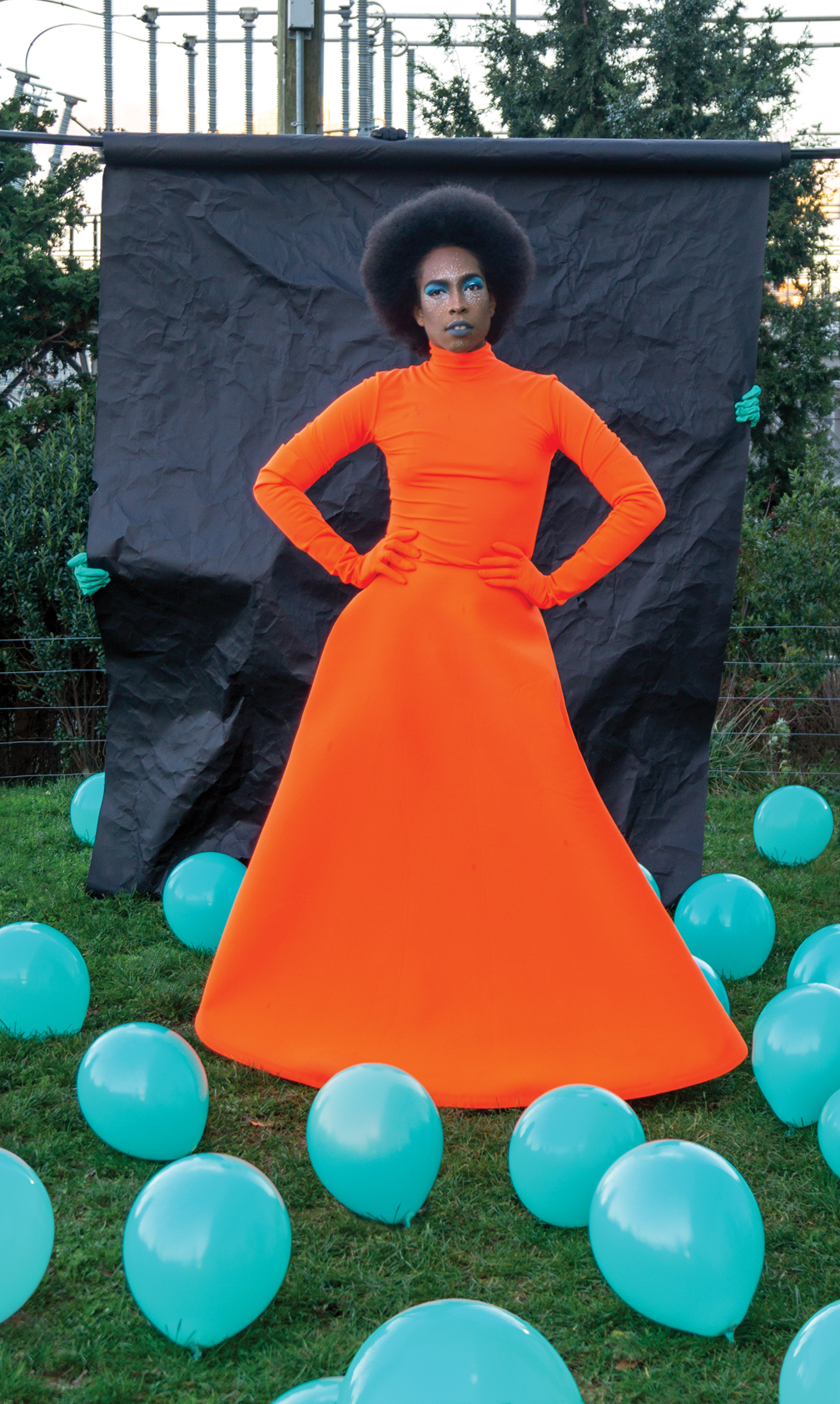