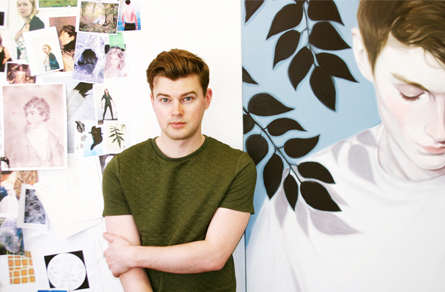 Parker chatted with the Canadian artist about his influences, witches, being a perfectionist and making a living from art.

Hey Kris, how are you? Hey Parker, I am well thanks, and you?

Good thanks. Thanks for doing this for us. So basic stuff first, where are you from? I was born in Windsor, Canada and grew up in a bunch on unromantic small farming towns in the province of Ontario. I moved to Toronto for art school and have been here ever since.

And when did you start making art? And what made you start making art? I have always loved drawing. I’d much rather sit on the floor and draw than play with other kids outside.  When others noticed that I could draw all of my Christmas and birthday presents became art supplies, so in some way I think I was groomed to be an artist.

So going off of that: what Christmas/birthday presents do you remember drawing? And parenthetically, do you have siblings? I think after age 5, all of my presents were art supplies, then as I got older they became more complicated art supplies.  I have to admit that I got sick of the art supplies but I’m thankful for them now. Yes I do have three siblings.

And it would be just too meta to be drawing your own art supplies you received as gifts, right? I have done a lot of boring still lives back in the day, so yes, I probably did a painting of my palette before, at least in art school, but so did everyone.

So for you was it always painting? Did you ever consider other mediums? Sure, I dabble in drawing, pastels and water colors but I am in love with oil paint. I love everything about it, the smell, the fluidity…how easy it is to erase a day of shitty painting with a swoop of a rag.

That’s true. I erase a lot.

Why is that? Are you a perfectionist? I am not an efficient painter to say the least—I am my worst critic. I paint everyday but I destroy half of my creations. If a new painting is not better than my last painting, I don’t want to show it or have it around. I have a lot of silent temper tantrums.

Wow. So do you make a living from your work? Yes after a decade of workaholism I finally make my living from the sale of art.

Congratulations! What jobs have you had? I have had many.  I have worked in art galleries for most of my twenties while working in restaurants at night so that I work in art galleries during the day.

So you’ve seen both sides: gallery side and artist side? Yes, I wanted to know everything about commercial galleries and public galleries.

So you knew how to present yourself in a way to the galleries when the day came? Of course, I have spent years watching other artist crash and burn from the sidelines.  Now I know what not to do.

Any memorable gallery or restaurant stories to share? Not one specifically, but my favorite moments were always the ones when a pumped up artist off the street demanded the director look at his or portfolio…basically threatening the director…it never worked in the artist’s favor.

From what I’ve read about your paintings, there’s a lot that goes unsaid in them, is this your aim? If so, why? Yes they’re very quiet paintings but people interpret them differently and add their own stories to them which I like. All of my paintings stem from something personal but I don’t want to dictate what they are about.

Right. I see that. I feel like the hints come in the titles. I like ambiguity and confusion in the softest statements.

What got you interested in regality? I think it stemmed from feeling like an impostor when I first moved to the city, slinking through urban sophistication and wealth, when socially and economically I was the opposite.

It’s interesting that these feelings stemmed from city life when your work takes place in the country. What is it about the country for you? I grew up in some very small towns and have a huge love/hate relationship with the country. I always dreamed of my life larger than it was, ever since I was a kid.

But why not set the paintings in the city? All of my themes are based on personal stories so in some ways I don’t feel like I am a city person. I am very much of farmer blood even though I spent years trying to pretend I wasn’t. I see the city as a place to work but I don’t really breathe until I leave it.

I feel like it’s a very different spin on the suburb to city story so many people have. I used to envy city kids having so much excitement at their fingertips…now I think differently…I don’t know if I would have used my imagination so much if I had so much stimulation around me. Where are you from?

North of boston, near Salem, where the witches are.

I’ve always wanted to go there. My stepsister used to be a goth and went on and on about Salem…that was going to be one of our road trips.

Speaking of childhood things, I went to hear this conversation with this director named Xavier Dolan last night, he said this very interesting thing about your true influences coming from childhood, and the teenage years. Is that the case for you? I think everyone has their roots, and knows where they come from. I think people leave geographically or mentally, but it is something that we all come back to.

Do you consider yourself a gay artist? Dealing with gay themes? Some of the works hint at it and some of the titles definitely do. Yes a lot of my work deals with notions of being queer, even though I don’t always paint guys. It’s always a weird question, are you a queer artist or an artist who happens to be queer?

I think growing up gay in the country definitely influenced my practice as an artist. I paint portraits of characters who hold secrets and that notion has unified all of my series and narratives over the years. I grew up hiding a lot of secrets and I want my characters to convey this kind of ambiguity.

And this ambiguity comes across via the style you choose to paint in too, yes? I think so, I am really fascinated by androgyny and neutrality when it comes to gender, sex, physiognomy and moods. I paint portraits which is historically one of the oldest forms of art but I treat the subject as a character for my narratives.

So when did you start taking this narrative approach to painting? I think all of my paintings have had a narrative approach since I started painting. I am really interested in myth, folklore, storytelling and gossip. I sometimes paint landscapes but I treat them like a portrait.

There are artists I’ve seen in the past two years who I think are working in the same realm as you such as Winston Chmielinski. Yes I saw Winston’s work at Volta this year, I quite enjoyed it.

I also see parallels with this artist, Andrej Dubravsky. Yes I’ve seen Andrej’s work also, I like how mystical it is. Yes I am only drawn to work, whether is it art or music that I have an emotional response too. I have to feel it.

Why are your characters all so pale? I like the ghostliness of a pastel palette but also I am referencing the cake makeup of the 17th century France. My characters wear masks but like the white lead paint of that era, the masks that hide their imperfections often poisoned them over time

When did you get interested in 17th century France? Ever since I was a kid. I remember my parents had taped a miniseries on Napoleon and Josephine and one of the first scenes was a beheading. I wasn’t allowed to watch this scene but when I they went to work, I would secretly rewind and play it over and over. I guess I was a bit creepy.

So in your paintings do you use models? I do use a lot of models (who are my friends but would love it if someone call them a model!) but I often make up a lot of my characters too. I often start with a photographic reference (models, images from mass media, vintage photographs) but drop the image half way through the painting. My models are always bummed out when they see the final painting because I have usually altered their appearance so much it doesn’t really resemble them anymore..that’s why my characters all kind of look the same.

What’s your idea of perfect happiness? Death I guess. I think if I was perfectly happy I’d be bored. I like that fire that ignites when you’re trying to accomplish something. I always want that fire to be there. I like a Karl Lagerfeld quote: “ I’m never content with what I do. I live in a sort of permanent dissatisfaction. I think that’s the secret to doing things well.” I think that’s the struggle that I want to face everyday.

So your greatest fear isn’t death then? No I see death as the big sleep. I am a workaholic raised by workaholics, death to me is the finish line.  My greatest fear is being in an accident and losing my hands. Seriously.

Alright, on that dark note I’ll let you go now. Thanks for chatting with me. Thank you. 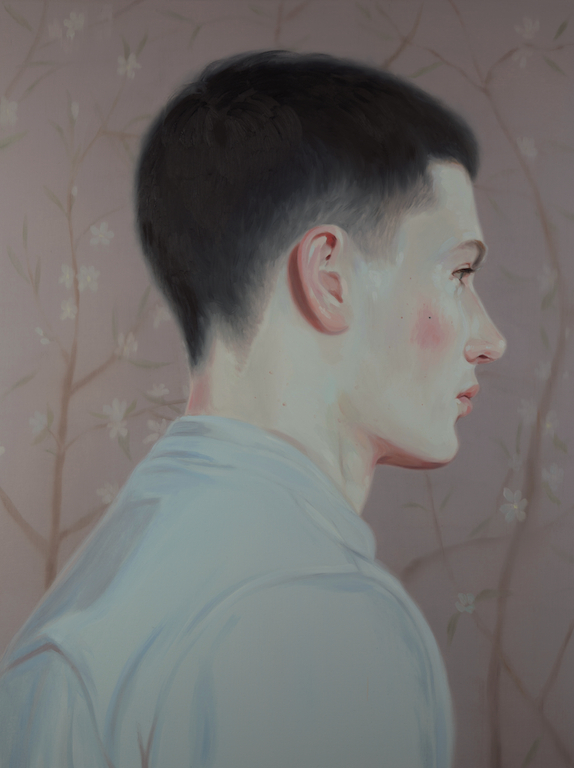 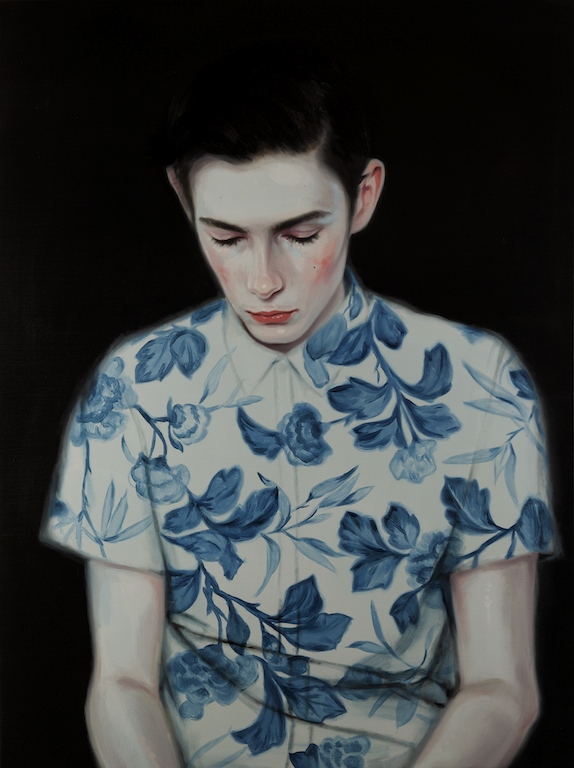 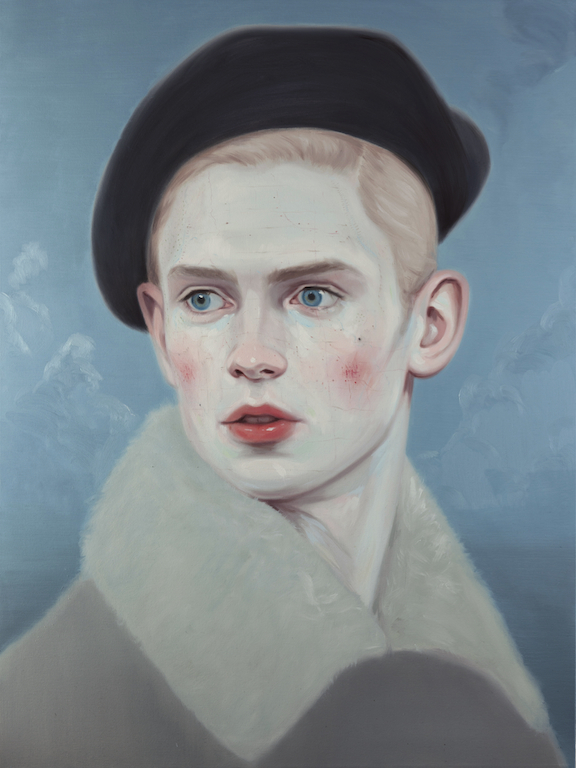 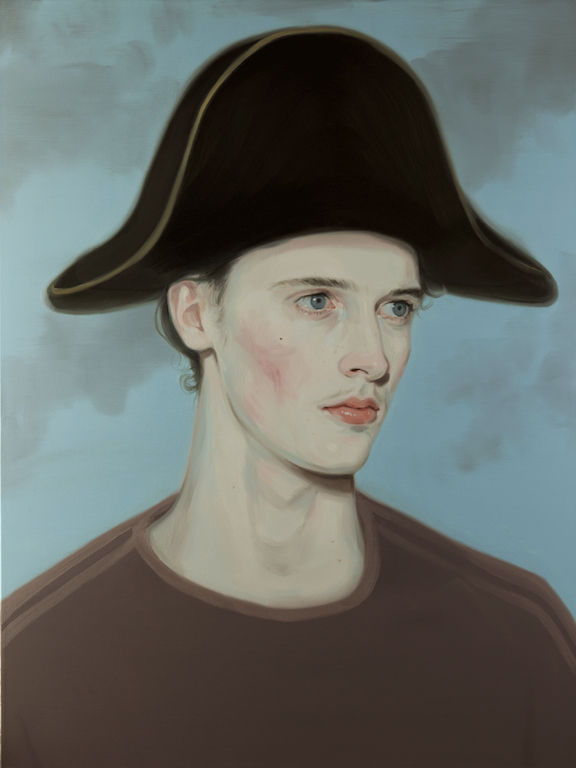 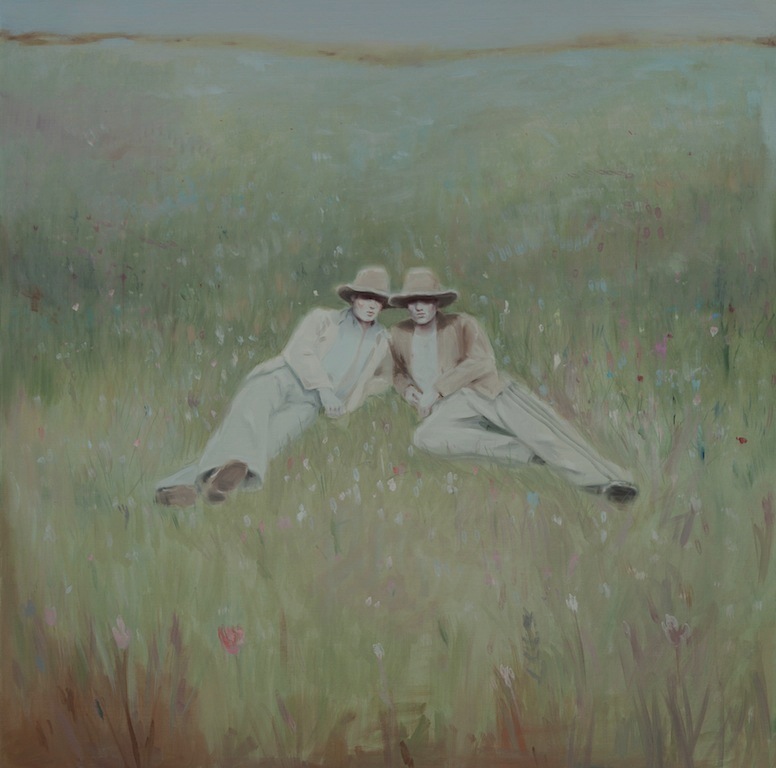