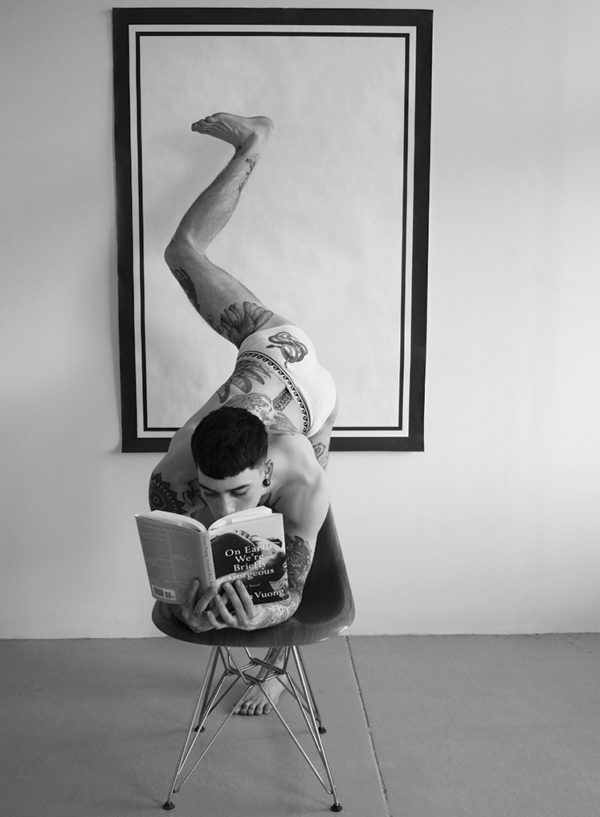 This book is not for you; it’s for Ocean Vuong’s mom. She was the daughter of an illiterate farmgirl and an American soldier. War made and unmade them. As Vuong wrote in his poem “Notebook Fragments,” “An American soldier fucked a Vietnamese farmgirl. Thus my mother exists. / Thus I exist. Thus no bombs = no family = no me. / Yikes.”

When war ended, the Oceans lost contact with their grandfather for almost two decades. They were forced to leave Vietnam for Connecticut when police realized Vuong’s mother was mixed race. Vuong was 2 years old.

Vuong’s mother won’t read her son’s debut novel, On Earth We’re Briefly Gorgeous, because she can’t read. Dyslexia runs in the family, Vuong suspects, and he links his approach to language with the ways he’s had to cope with the learning disability — “Because I write very slowly and see words as objects,” he says. After publishing his first book of poems, Night Sky with Exit Wounds, in 2016, he told the Guardian, “I’m always trying to look for words inside words. It’s so beautiful to me that the word laughter is inside slaughter.”

Beauty is a primary concern. “All this time I told myself we were born from war — but I was wrong, Ma. We were born from beauty,” he writes. Seeing beauty everywhere, he preserves it in careful, lyrical prose: “I never wanted to build a ‘body of work’ but to preserve these, our bodies, breathing and unaccounted for, inside the work.”

As Elaine Scarry writes in her essay “On Beauty and Being Just”: “Beauty brings copies of itself into being.” (Scarry, along with Frank Ocean and Whitney Houston, is thanked in the acknowledgments of Vuong’s book).

In the novel, Vuong calls himself “Little Dog,” a narrator who shares an uncanny amount of biography with the author. Thus Vuong’s novel is less a fictionalization and more a replication, a mirror Vuong holds up to make more beauty, more of himself, more of his family and the first boy he loved.

Although the book is for his mother, it’s really about Trevor —“a name like an engine starting up at night.” Trevor is Vuong’s first love, a fucked-up, addict farmboy so beautiful that a copy of himself has come into being in this novel, so beautiful that pieces of him have floated into the very paragraph before you now.

You could track the moments Vuong considers most beautiful by tallying how often each is reflected in the book. His first kiss with Trevor, for instance, is summoned from memory at least a halfdozen times. Reminisces on the barn where they kissed — what they were wearing, what was on the radio — rise to an elevated status, too.

And there’s more, always more. More life. More being alive. “I want to insist that our being alive is beautiful enough to be worthy of replication,” he says. “So what if all I ever made of my life is more of it?”

It is the presence of beauty, Scarry says, which reminds us that all is alive: “One’s daily unmindfulness of the aliveness of others is temporarily interrupted in the presence of a beautiful person, alerting us to the requirements placed on us by the aliveness of all persons.” Only when Trevor finds Vuong beautiful does Vuong see beauty in himself. He stands before a mirror and catalogs his flaws, seeing them now as something desired. “Because the thing about beauty is that it’s only beautiful outside of itself,” he says, his heart fluttering like “a trapped fish,” more alive now than he was before. Get the book here.