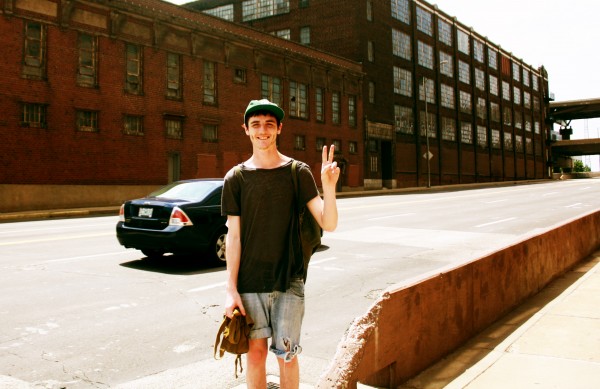 Our intern Thomas decided to spend the the next few weeks hitchhiking across the country. When he first told us, we couldn’t help but turn into nervous moms and try to convince him to take a Greyhound. He wasn’t interested (kids these days!). So instead, we’ve asked him to write a road diary of his experiences along the way. Here’s part 1. —T&A

The act of hitchhiking with my fag-hag, the lovely Alice, from NY to LA is a novel experience above all else. Trains, buses and strangers cars will serve as our main modes of transportation — fortunately/unfortunately. This plan is foolishly romantic but clichés exist for a reason — because they’re wonderful! Did I mention that my boyfriend is waiting for me in LA? (I’ve unintentionally stepped into a starry-eyed piece of Queer-Beat cinema).

“Make sure you take some mace and only ride with girls and gays!” —Tom John Jackson

It’s day 3 and we’ve already seen too much to document here.

We’ve ridden in a car with some generous folks who could’ve been friends of Frank Booth from David Lynch’s twisted masterpiece Blue Velvet. After about 10 minutes their potential darkness subsided. I think it was their choice of music — Lil Wayne isn’t as spine chilling as Roy Orbison.

We’ve walked through towns where every single passerby has thrown a stern glare at me. The overall sense of animosity coming from these townies can be intense. I experienced subtle but strong paranoia. My trusty GAYLETTER tote bag hasn’t served me any favors in these situations.

We’ve met a bizarrely homophobic man who spent 3 years in prison for assault and burglary — who also admitted to breaking noses of fags…charming. Other than that though he truly was quite a nice guy.

We’ve spoken with a very Christian man who claims god gave him the van he was driving back to his wife’s house after being kicked out 3 days before. In the back seat sat his entire wardrobe — next to a wood carving of an elk. Rural North America is a place of mystery but above all delusion.

Day 3 was certainly the most exciting day and also the most fascinating. Alice and I visited the local St. Louis gay bar Just Johns for their Tuesday night karaoke. The bar was small, quite and most interestingly discreet. It was clear everyone in there knew each other as they sat casually around the bar. I couldn’t wrap my head around the ever-present sense of optimism — optimism within a campy queer bar where everyone dresses like straight men.

At Just Johns people were more talkative, and in an odd way more comfortable. It appears that in less liberal cities — conversation trumps cruising. Alice and I were approached by a woman who was definitely on our level of intoxication — she asked us if we’d seen “an uber gay named Kevin walk down here”, we said no, but ended up following her across the street to another bar, Rehab, and then back to Just Johns. From what I could gather she’s a resident fag-hag, as she seemed to know 80% of the folks in each bar. Her roommate was very impressed that Alice and I were from New York — I’m now starting to believe what Lena Dunham once said in GIRLS, “You are from New York, therefore you are just naturally more interesting.” We also met a very “cute” boy who had some kind of a sugar daddy, though when asked he claimed “we’re just friends, but the lines do blur.” A bit later he was told by his daddy (Landmark Bob) that he could have “absolutely anything you want” —  jealous.

Apparently Just Johns is “where the high school jocks come before they realize they aren’t jocks anymore”. Unfortunately I was too overwhelmed by the bar that I forgot to take any decent photographs — I’ll make sure Alice reminds me next time.

Road tripping is queer. Never would I have guessed that I would love St. Louis. I will admit that I am ignorant about most American cities but St. Louis is not at all what I was expecting. Thank you St. Louis — the obscurities of your gay scene suggest insecurities, but your characters suggests happiness and your dirt-cheap drinks suggest honestly and an overall respect for one another. This, unfortunately, does not really exist in Manhattan.