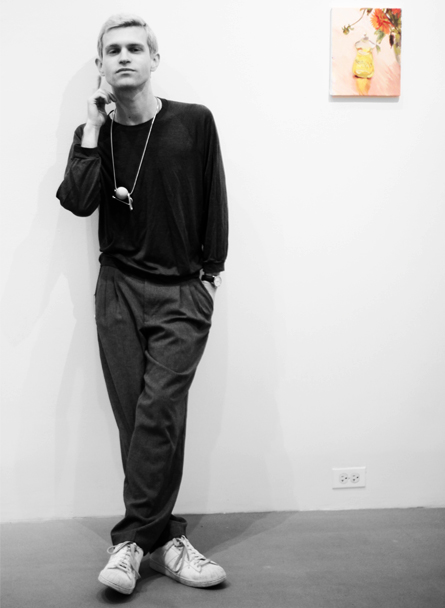 I spoke with Connecticut-born artist Sam McKinniss about everything from iPhones in bed, to Sade, to existential rave moments, to dish soap. His work is featured in the 2013 MFA Thesis Exhibition at NYU’s 80WSE gallery which runs until April 13.

Sam where are you from? How did you end up in New York? I’m from Connecticut. That’s where I grew up. I moved to New York a little bit ago to get my MFA at NYU. Before that I was living in Boston and around New England. But I came here to go to school and also because it’s probably just time that I live here.

What is your favorite New England town? Provincetown.

When did you start making art? Most kids make art but I thought that it was a good idea to keep doing it in high school. I’ve tried working, I’ve tried having a job. I’ve been painting seriously for a few years now. I think I was always making art as a kid and then I grew up and there’s not really much you can do and still keep yourself from boredom, keep yourself from going nuts and being swallowed into some kind of day job paradigm. That’s just not really my style. I think my priority is to stay fresh, stay inspired, stay relevant, stay in touch with things. Painting is the way that I think about pictures. I think that’s always been my style really, just looking at pictures intensely. Being intense. And see if you can respond in some way to the world that you live in visually with light and color.

Have you always been intense? Yeah…I was an intense infant.

Like sadistic drawings on the wall? No, just like a little bit mean, but also cute…I’ve always been hilarious.

What kind of jobs have you had? Well, I was a florist for a while. And then I worked at an antiquarian bookstore, which bought and sold rare and valuable books. I was a waitress for a while and then I was…I don’t know what else. I was in retail. Stupid stuff.

If she would receive you? Yeah, yeah.

Is humor a big thing for you in life and in your art? Yes, kind of in art, but in life yeah…It’s hard to talk to people who aren’t funny.

It is hard to talk to people that aren’t funny because they don’t get things. Yeah. Humor is sort of like this advanced or elevated state of consciousness that I really respond to. I think humor is sort of like a special intelligence. It’s the way that I prefer to communicate with people, so if something’s not funny I have trouble cooperating.

What was the last thing that made you really laugh? Those dogs that wear pantyhose (laughs).

Do you consider yourself a gay artist? And does your work exclusively deal with gay themes? Yes and No. My work is about a divine light, it’s about color. It’s about being thrilled by something. My work is about material pleasure. My work is about a miraculous thrill. I get there through color and through form and the coalescence of line and shape and texture and material. Scenes and pictures from my life infiltrate my studio practice when they are prescient or vital, and many of those scenes are sexy or homoromantic. I enjoy it when that happens but I hope that the paintings transcend my demographic milieu and project out into a broader conversation, in at least a dozen or so different directions.

Where do you get inspiration from? Because it seems like, especially in this show, your work is very diverse. It’s not just portraits. It’s still life and more abstract things. This group of work is inspired by a few different specific experiences. It’s inspired by a photograph that I found in my boyfriend’s closet a few years ago…a picture of him when he was 17, when he was losing his mind on ecstasy at a party in like 2000. So I’m starting there. But I’m also inspired by Sade’s music, which to me is the apex of beauty. Like that to me is the utmost…the high point of all art ever. I’m so inspired by her voice and then a lot of this work too is reacting to the heady kind of sensual overload that I can experience in New York City nightlife. So a lot of these glow stick portraits are distilled, singularized, fantasized visions of moments of desire as experienced in a warehouse rave or something like that. So for instance when a guy is wearing a glow stick necklace in one of my pictures; that is a fantasized version of what it might be like to feel haunted or mesmerized by that neon light, an ephemeral light which will disappear in the morning. It can only exist at nighttime. And then the other thing I’m inspired by is a kind of literal expression of being haunted, feeling possessed as if by an image or light or color, so there are ghosts floating around in some of these paintings and those ghosts remind me of bodies dancing in smoky rooms or drug-filled rooms. And also just trying to come to terms with the severely depressing fact that every photograph you come across is a ghost of a moment that will never exist again. That’s what I’m inspired by right now. I’m looking for a sinister ray of light. 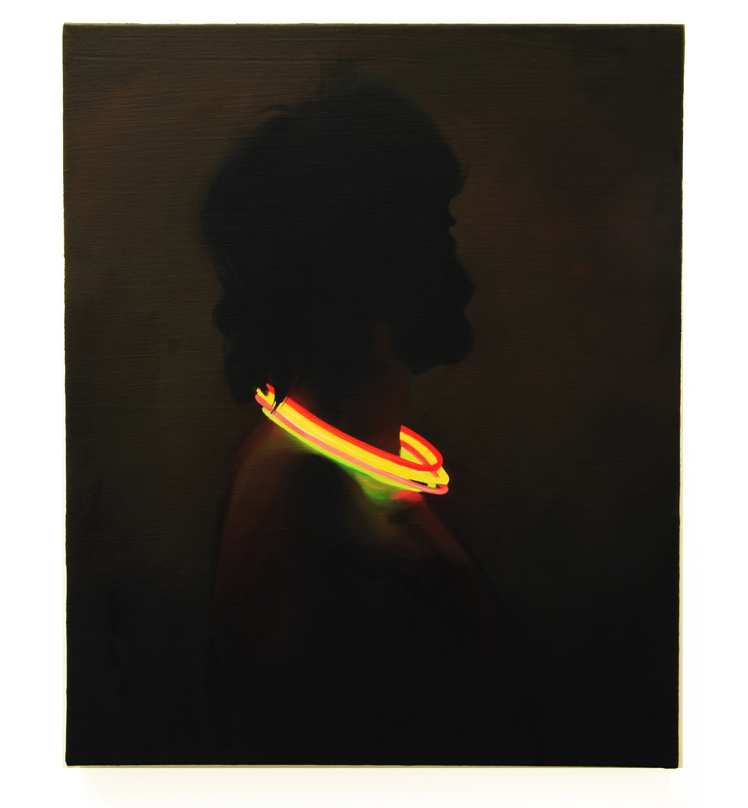 Do you think you have to be haunted to be a good artist? It can’t hurt.

Who or what do you most what to paint that you haven’t yet? You know who I think is so inspiring? Niko da Ikon. Do you know who that is? He takes a lot of selfies. He’s on Instagram. I think he’s a stylist. I’d love to photograph him. I also keep saying Sade but I’m dying to do a project with her.

So what school of painting are you coming from? I would say it’s religious art. I would say my work is incredibly Catholic in some ways and then very pagan in other ways. I guess if you could sum it up, I don’t know what school it’s in but I think you could say I make very emotionally rewarding work.

Do you have Catholic guilt? No I don’t really think about guilt. I don’t do bad things so I don’t feel guilty.

Can you talk about the painting with the dish soap? Yes. 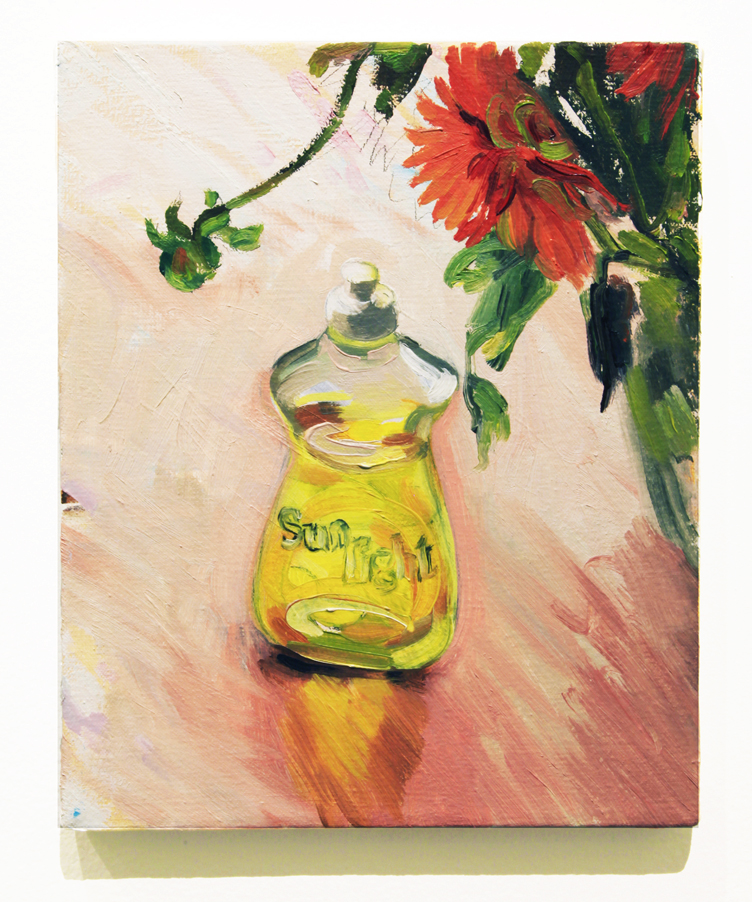 It’s really sweet. It is a sweet painting. It’s called “Sunlight.” I was into this one specific consumer product. I think it’s a low end, somewhat generic brand of dish soap. It’s got this intense, impossible yellow. It’s really syrupy and gorgeous. I was using it to clean my brushes but I just as easily could have been using it to clean a plate. So that painting is about total freedom, living at home. It’s about doing your dishes. It’s about getting off on an actual ray of sunlight passing through a packaged brand of sunlight, which you use to do your dishes. There’s a flower in it cause I used to be a florist. And I still feel very turned on by….

What’s your favorite flower? Celery. Like a celery stick. I think that’s really gonna be hot in 2013 floral arrangements. But maybe 2014.

So celery’s your favorite flower? Yeah that and a peony.

You’ve taken on more mediums lately, can you talk about that? I think painting is an extraordinarily versatile and intensely powerful material. And it can do a lot of things very well, but I collaborated with a DJ [Rizzla] for this show to make a remix of a Sade song because I wanted to greet gallery visitors with a few different ways of emotional address. So maybe a song can address you or effect you in a way that painting just can’t do because painting is by its nature just a visual thing. Music affects you in a way that’s somehow more immediate or maybe just different and more emotional. I was feeling generous with this show and felt like sharing this Sade fixation with the viewer. I wanted help to create a complete mood so it was visual as well as audible.

What about the chair with the sweatshirt [‘2 Chairz’] that was in the show in December? The chairs were funny because those are my kitchen chairs. They stack on top of each other and to me they looked like they were spooning each other, or having anal sex or something. And that was cool so I wanted to hint at that. The chairs were kind of like a minimal sort of 90s interior style, a decorative style that seemed on trend right now. And then the Nike sweatshirt I threw in there as a sort of nod to net art which I think is perplexing and also interesting. I appreciate that energy. So I put that sculpture together because it looked like a couple of gays fucking each other and the Nike thing seemed really triumphant as well as being about the Internet. 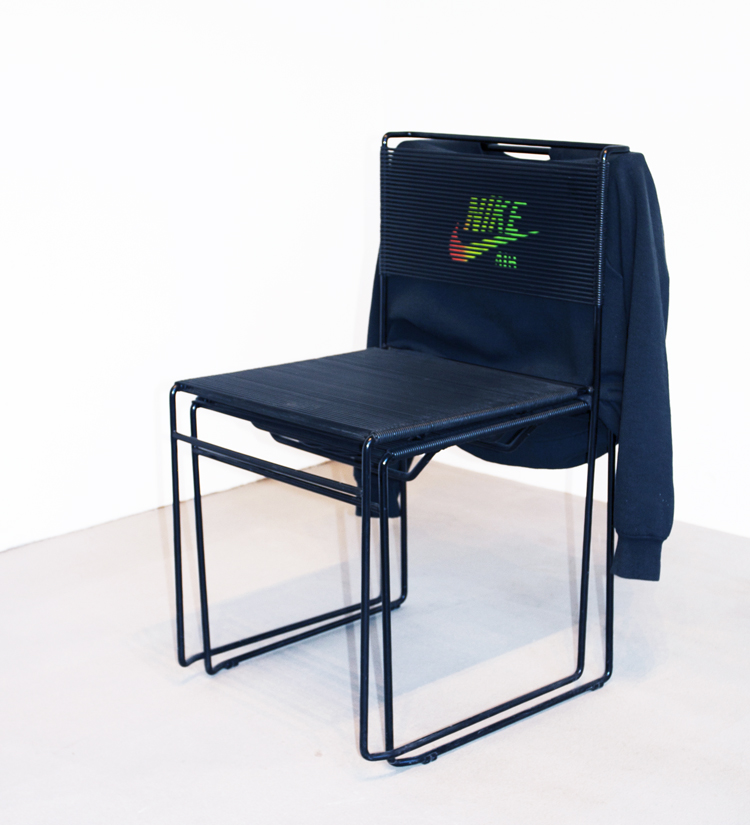 What about this insertion of technology in your work with the texting in the portraits? I like painting pictures of people in bed looking at their iPhones. It’s a phenomenon that I want to include in my work because it’s actually life-changing. Getting an iPhone is life-changing. It’s so common, it’s almost banal, but I think it still has some magic in it. Painting half naked guys in bed texting is a thing that I do because I’m thinking that gazing into the iPhone screen resembles Narcissus staring into his pool. I’m thinking that it’s self-reflective and self-admiring as well as being about instant global communication and all that. I like the light that comes off the iPhone, it’s extremely seductive and cool and absolutely related to the moment that we all exist in right now. It is contemporary. Those are things that I’m interested in, but also I’m just into Boucher. I’m into a hot ass sprawled out on a cute bed. It seems like my best moment of the day is waking up at daybreak or something and noticing whose ass is sprawled out next to mine. That’s the kind of hot moment that I live for.

Do you have an iPhone? Yeah. It’s charging.

So you painted BOYTWEETSWORLD. He’s big on Twitter. Yeah he’s a stylist. He lives in the Bay Area. I think he lives in Oakland. I like his selfies. He takes a lot of selfies and I think his look is on point. He’s trend predictive, okay? So he knows what’s gonna happen next and he knows what’s hot and I like his style. I like his brand. His personal brand is something I really relate to. 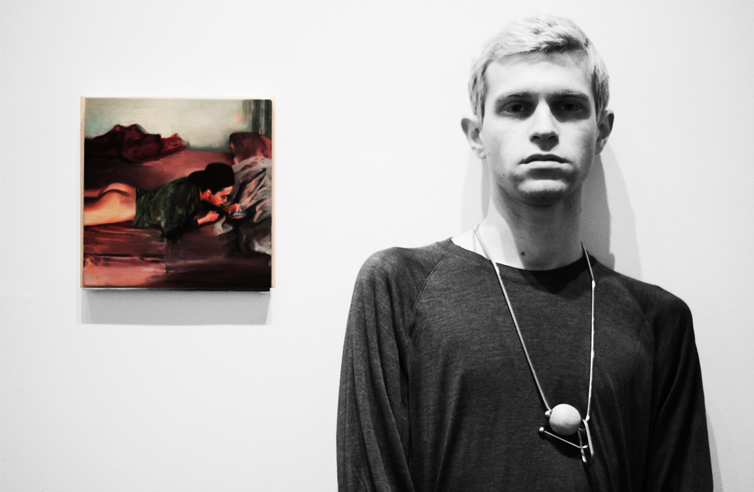 Sam next to his ‘BOYTWEETSWORLD’ painting photographed by Maansi Jain

Do you have a personal brand? Yeah I’m into ghosts. I’m into Sade. I’m into wit. I’m into divine light. I’m into celery. I’m into seltzer. Those are my brand pinnacles.

Thanks for chatting with me. Thank you. 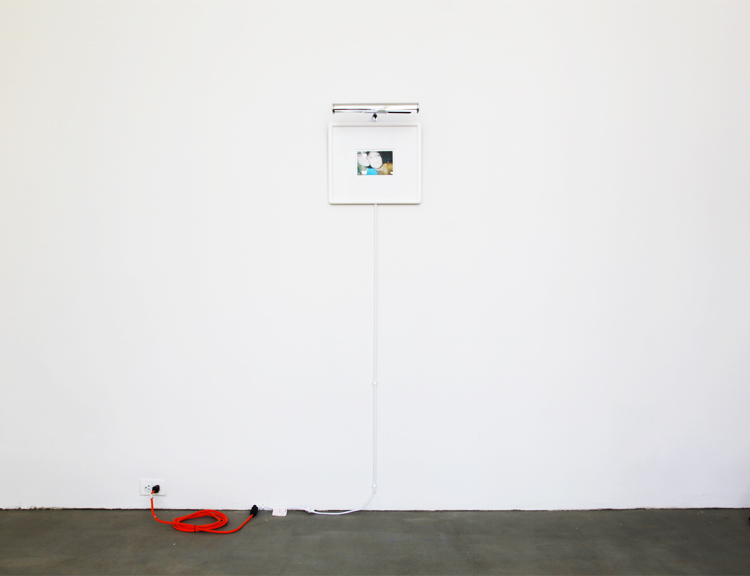