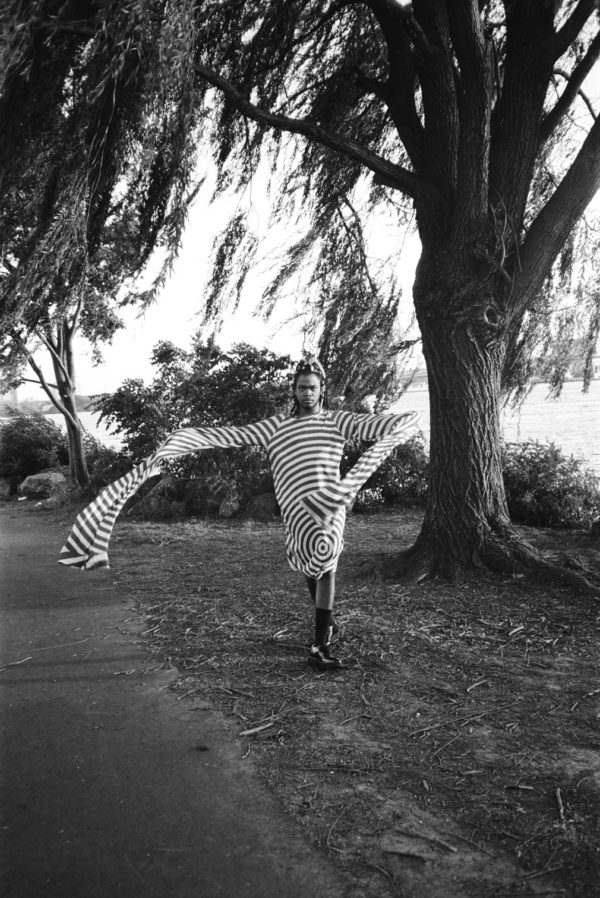 This autumn, Shamir released his seventh full-length release, Shamir. Our favorite countertenor has been taking his time to nurture his craft, game, and it-ness in Philly’s DIY scene. Since Hope and Revelations (both released in 2017), Shamir has released the full-length statement records Resolution (2018), Be the Yee, Here Comes the Haw (2019), and Cataclysm (2020). These document Shamir’s artistic growth from cutie caterpillar eco-nerd toward the winged pop star we encounter, cocoon-less, on Shamir. We love to see it. I spoke with the artist in the late summer about pop stardom and visibility, the butterfly, mental health, Scorpio, Capricorn, the Oracle Twins, and two pairs of twin moms. Peep our star-crossing conversation below.

I noticed you began to use the butterfly image during Revelations, and by now it’s really flourished and multiplied. What does the butterfly help you symbolize? It was always a natural thing. It’s weird, one of my closest friends lives in Ottawa, and there’s a moth outburst there. At first, we thought it was butterflies, but he actually did some research and talked to his neighbors, and it’s a moth outburst. They’re blind; they run into you and hit you, and that shit hurts, you know? Anyway, I told him, “moths are cousins of butterflies,” and then I sensed this tingle — this was literally yesterday — and I was brought back to another time in my life. At the beginning of middle school, that’s when I was an eco-nerd, I had three different fish tanks in my room. I had frogs and a lizard. Throughout all of this time, I didn’t really have any friends. [Laughs] But I was vibing! It wasn’t not by choice. That memory just hit me like a brick yesterday. That was the first interest, the proto-interest. And then I found this butterfly clip randomly in my rehearsal space. It was just neatly and perfectly on the keyboard.

Like a key. Like a key. I was in awe; it was this weird connection. I immediately picked it up, put it in my hair, and it hasn’t left since. Everything post-Ratchet (2015) has been the butterfly thing. Later on I came to realize that the butterfly represents the past, transformation and rebirth. Once I figured that out, I was like, well, there we go!

At that time of my life, I knew that I was shedding an old version of myself — or not necessarily an old version, but a version that was projected to a lot of people. I was fully aware of what Ratchet was doing; I just didn’t think people would like it so much. And then you start to get the imposter syndrome, and it’s like, this is not me though. I was just trying to do something fun as an experiment, cause I knew that wasn’t me. I was so young and naive, not realizing the importance of first impressions.

How do you manage introversion against the pressures of visibility? You know, being visible was never the hard part. Being perceived is. I don’t mind being visible, but take me as I am, when I am. Don’t take my image, or what you see, and run with that. Cause you’re always gonna be disappointed. I’m a Scorpio. One of the main traits of Scorpios is that we reinvent ourselves constantly. I personally love change. I invite it. By nature, I can’t just be one way. I feel sorry for people who try to pin one idea down to me. Like, don’t do it, but for yourself. How about that? Not even for me. 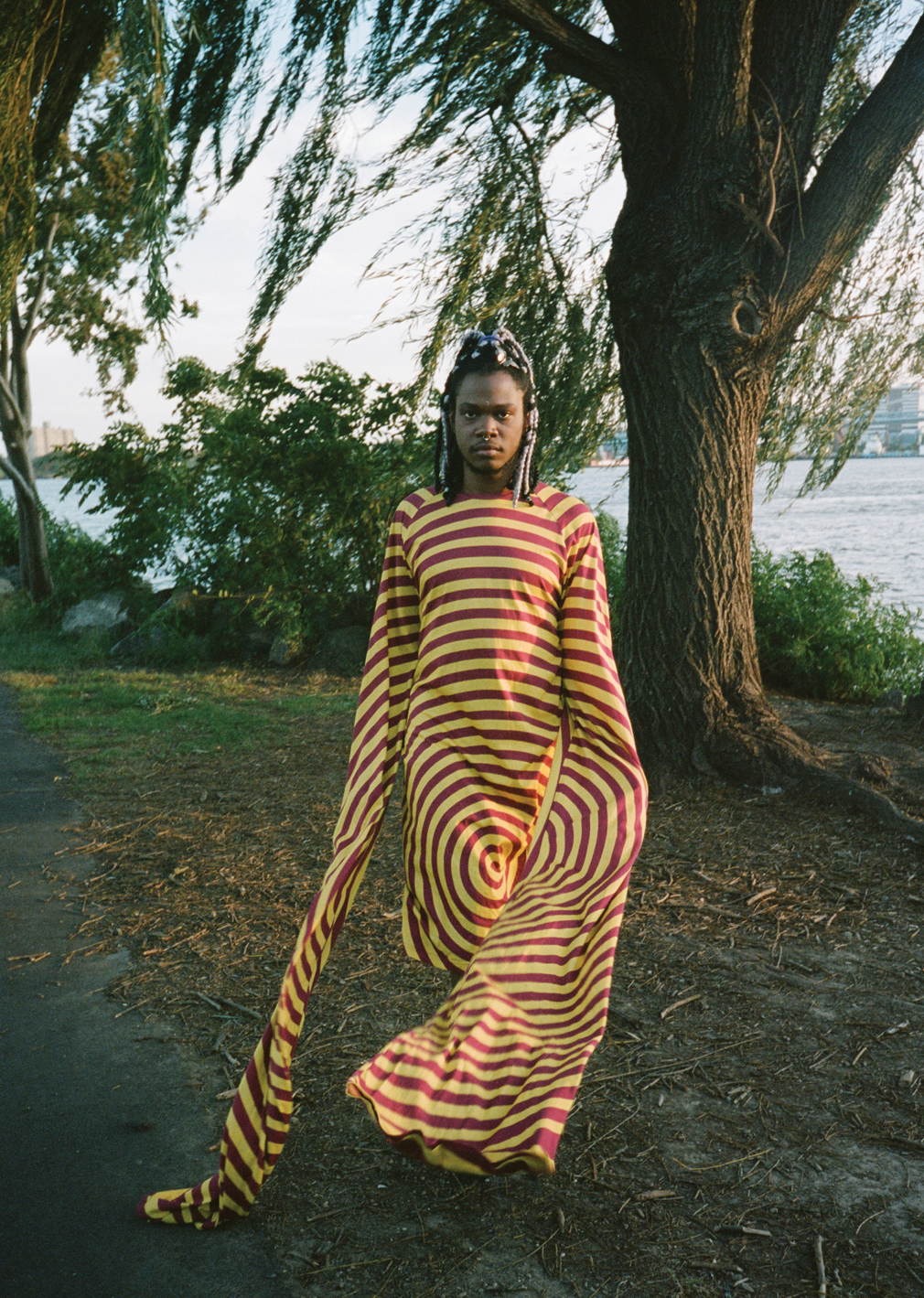 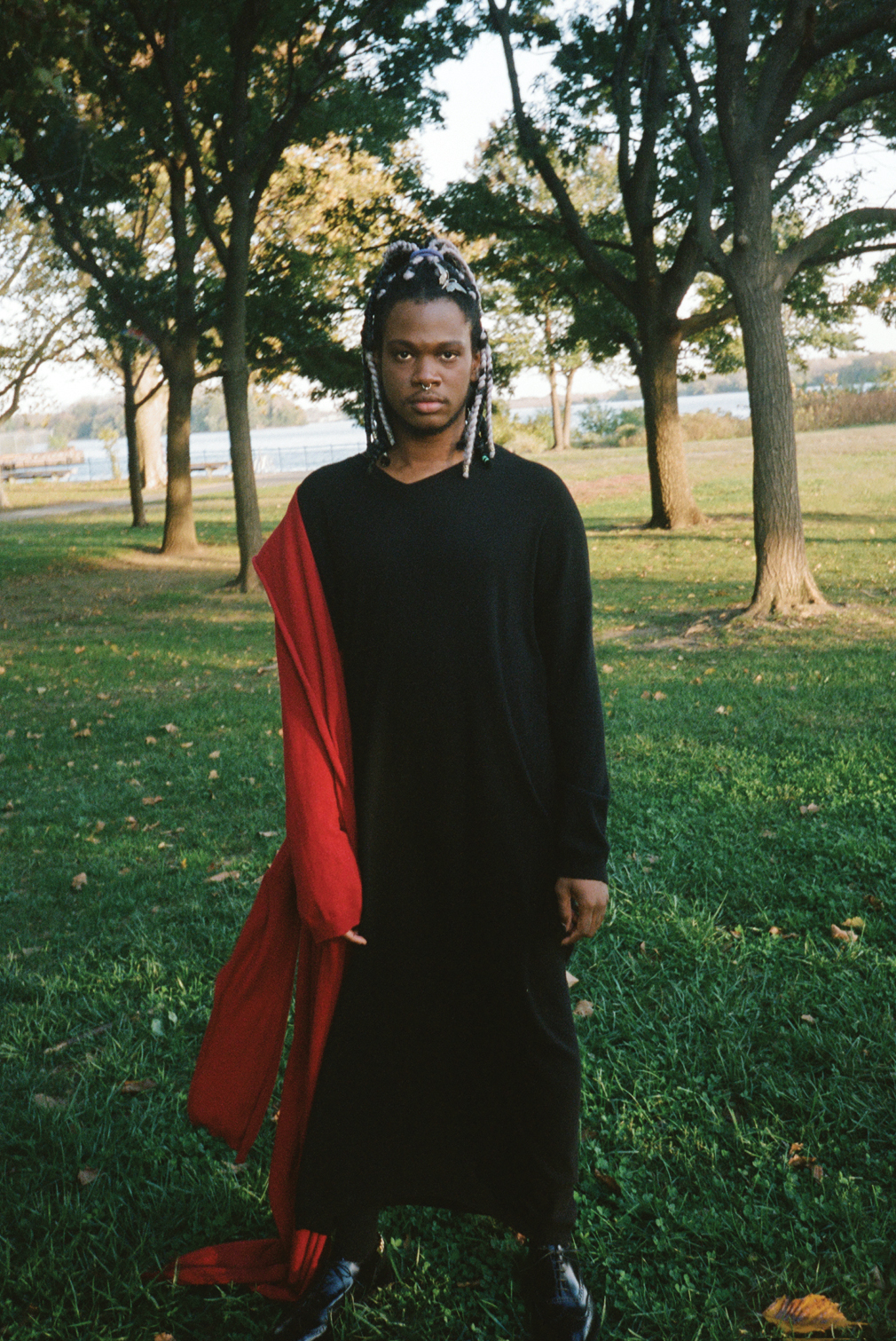 That’s a healthy stance. You don’t shy away from the term “pop star.” What does it mean to you? Now, the term “pop star” is so much a numbers thing. It’s a capitalistic thing. I have to say, it’s never not been like that, but now, to be a pop star means that you are a commodity and absolutely nothing else.

When I call myself a pop star, I mean that I am for the people first and foremost. I make my music, or at least the records that are pop, for the people. I made this record to be accessible to everyone. Whenever I’m widely releasing anything, I don’t want anyone to feel alienated by it. If I’m gonna spend the time to get this out to that many people, I’m gonna want as many people to like it and relate to it. In indie music, that inherent idea of like, my music isn’t for everyone — well that’s stupid. Whoopty fucking do.

As someone so conscious of the audience, how do you draw a line between an artist’s mental health and the work that they produce? Do we support a problem by supporting the work? That specific question is something I used to ask myself a lot, especially after I got my diagnosis and mental health became more of a topic of conversation. I kind of touched on this in a podcast I did, “Songwriting Saves the World.” I mentioned Hope, which is a record that I did in one weekend, which was kind of the catalyst of my diagnosis and my first really bad manic episode. Other than that, I don’t work in my emotions, and that’s the perfect example of why.

Another example is my song “I Can’t Breathe.” I wrote that about Tamir Rice and Eric Garner. I released it a couple of years later, afterward. Even though it maybe wasn’t a topic of conversation at the time, obviously two years later it’s still an issue. But some people were like, “Why are you writing this so many years later?”

I have to have a level of perspective to feel safe to work in my emotions. A lot of artists do get by just working immediately in their emotions, and I’m not sure how healthy that is. If you are gonna do that type of emotional work when you’re creating your art, you’ve gotta take care of yourself. It’s kind of like checking in with your partner after intercourse. You have to do the same thing with yourself — on an even grander scale, realistically. That’s a mental health practice, a self-care practice, that every artist should think about.

How do you create that space for yourself? I mean, if we’re going back to science, I’m a Capricorn moon, and we are very logical about our emotions. But I’m also a Scorpio, so I feel deeply. I take time to process things with no remorse. Sometimes it takes days, weeks, whatever, for me to process a small thing that happened maybe a few days ago, or a week ago, or a month ago. I constantly, just think it through and feel it through.

That makes better for the art as well. Cause you hear from artists that they don’t like what they wrote, how they’re emotionally removed now. I’m just like, couldn’t be me. 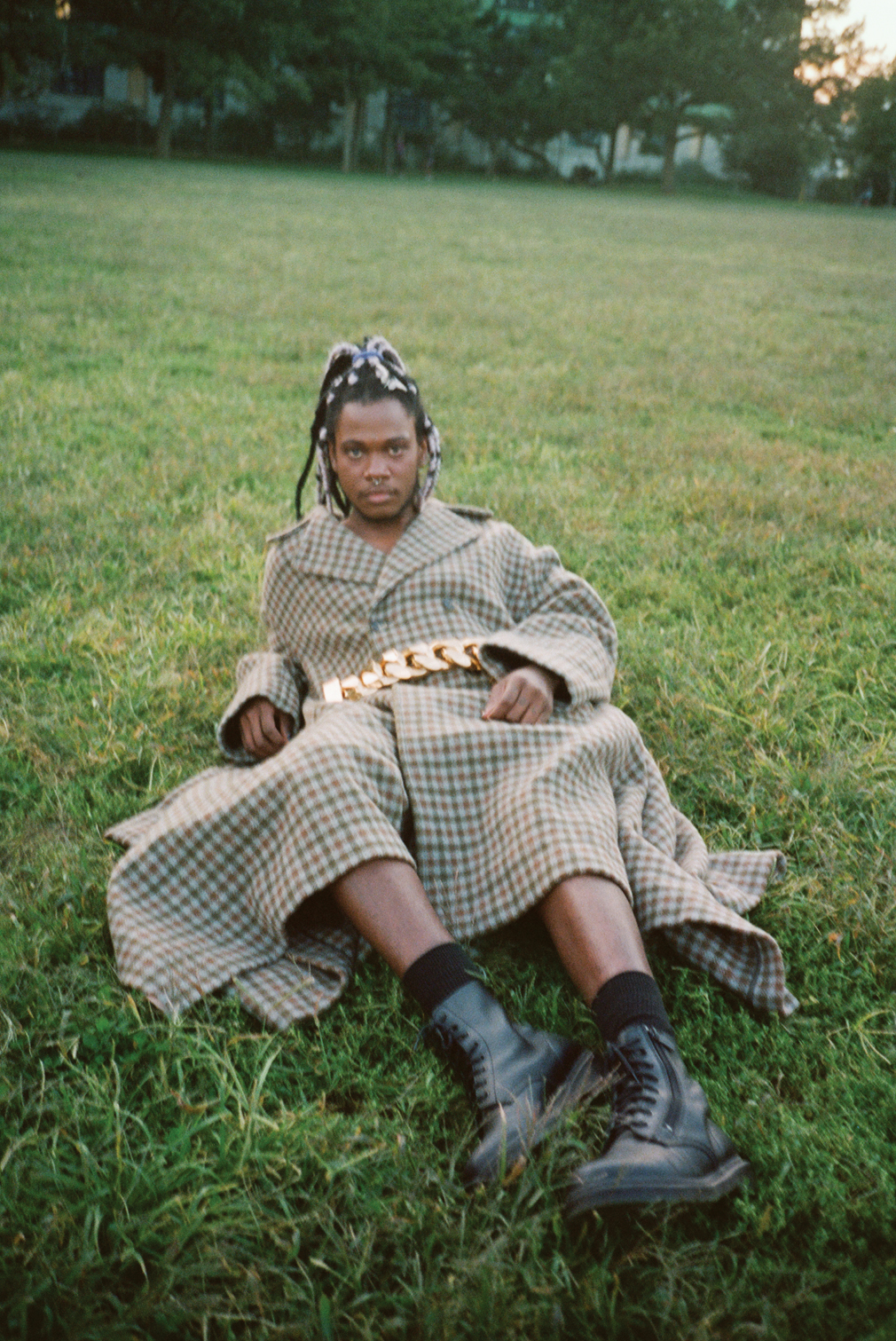 In an old interview, you mentioned your mom telling you to work with the retrograde instead of against it. I thought that was cool. What sort of strength do you draw from that relationship? Is that too personal? My relationship with my mom is funny because she’s so young. She had me at 19. Our relationship feels more like siblings than anything else. Referring to the conversation you’re talking about, that’s not necessarily motherly advice, right? Or at least, what I think of as typical motherly advice is more controlling, like, “This is what you need to do. I’ll tell you what to do.” You know?

Our relationship has always been nicely open-ended like that. I think that has been the sole reason why I’ve always been the very individual, nonconformist person that I am. I never had parents who had specific societal ideals they pressured onto me. I’m so lucky in that way. I see how other people won’t even turn to their parents because they don’t need someone telling them what to do and not giving them any actual advice.

Then also, I get double as well, because my mom’s a twin. And some would even say that I’m closer to my mom’s twin. She’s like my best friend in the family. I kinda have, like, my own Oracle Twins.

Now I understand. They help me through a lot.

Oh! I got to talk to Tegan and Sara about High School, their [2019] memoir. Tegan shouted you out for a second. Oh my god, are you kidding me? Those are my second twin moms. You know, every time they come to Philly, it’s like, “Clear out the green room.” They sit me down, both of them in front of me, and they’re like, “How are you doing? Are you eating? Are you taking care of yourself? Do you need anything?” I love them. They’re the best. 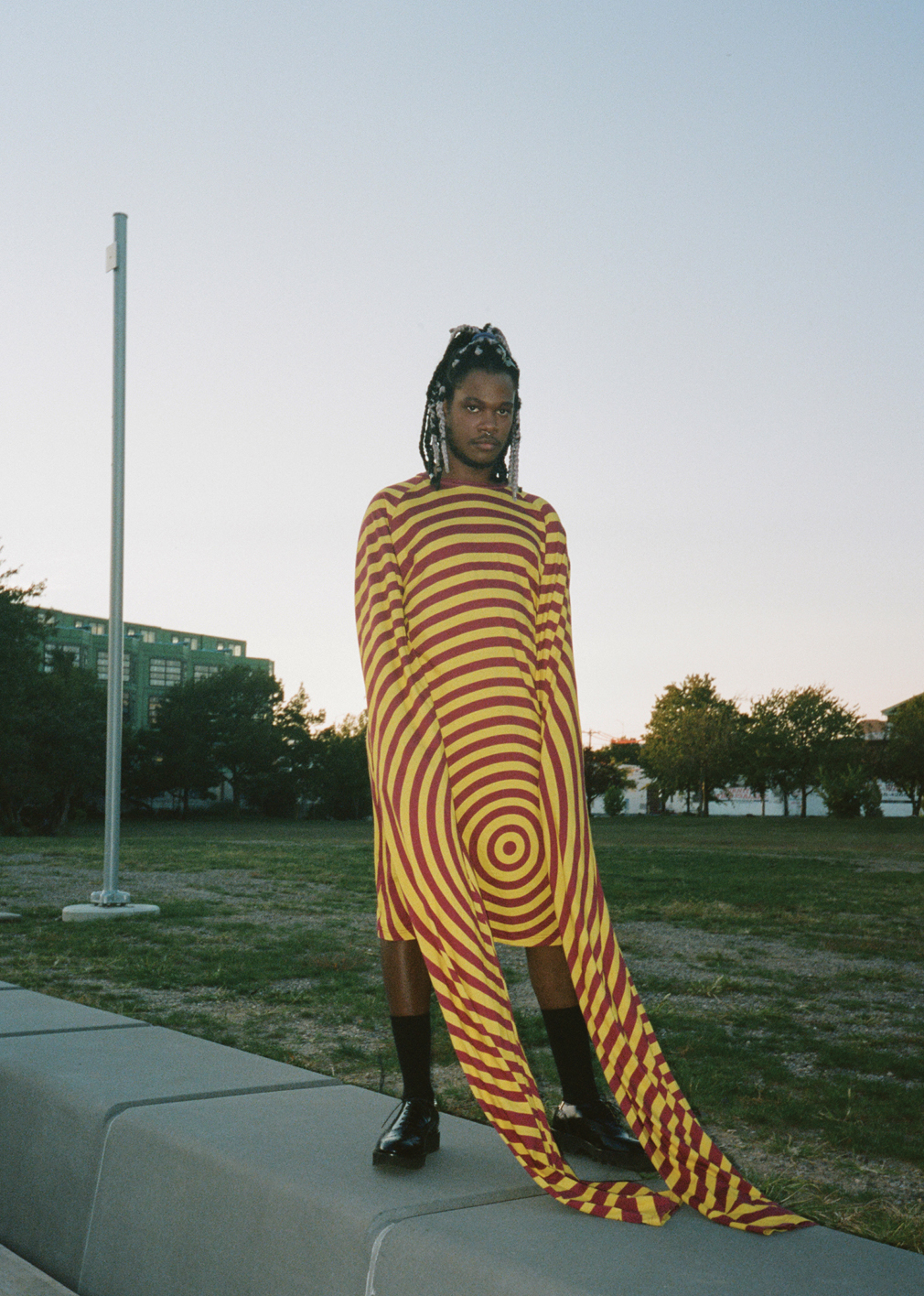 DRESS AND SHOES BY JW ANDERSON.