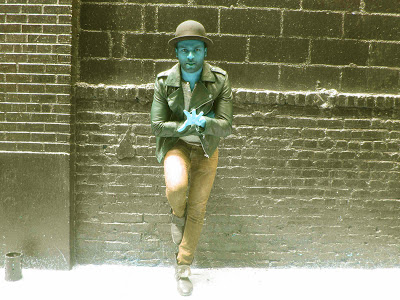 Yuzima is a rising talent whose raw industrial, oddly ambient, punk rock noises create an immensely compelling scene. When I first heard Yuzima’s newest track, ‘Anarchy‘, I was reminded of Rowland S. Howard, Ty Segall and even Jandek — this deserves an instant applause, I never believed that another being on this planet could posses anything close to a Jandek quality. “I just hear so much complaining; you say to yourself, we could be in paradise and the same folks would be complaining. Anarchy is about reality not just a show or being cool, It’s anti-poser… you want to see something happen — go out and change it”

Yuzima is a registered Occupy musician, which typically I would be skeptical of however this song, and other tracks by Yuzima, feel wholly authentic and in no way nihilistic. Noting Nirvana as an influence he is passionate about presenting hard rock to those of us who don’t belong in that niche category. I for one hope he achieves this, personally I feel this track (and hopefully the full length album) is fucking flawless and real. It’s also undeniably endearing and refreshing to hear a queer musician without a steady club beat saturated with sexual innuendoes.

Anarchy is the first release off the artists upcoming LP The Machine (scheduled to be released later in the year).