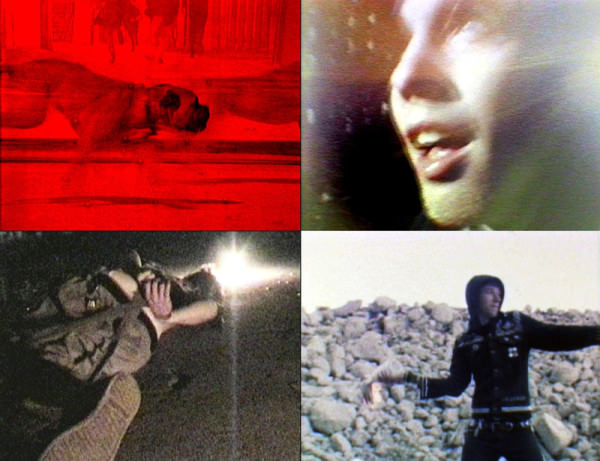 A still from the film 'The Salivation Army.'

Light flickers through a darkened auditorium. On the screen, the face of a skinhead appears, smirking slightly. The camera pans over his naked body, flecked with occasional grains from the aging Super 8 reel. This is one of the members of queercore band Fagbash, filmed by Jonesy for a projection at a legendary 1992 sex party, Fiend, in New York’s Bowery. The three minute film was the brief opener to Hardcore Home Movies, a program of queer DIY/experimental films curated by Dirty Looks NYC founder Bradford Nordeen, hosted by REDCAT at downtown L.A.’s Disney Hall on March 2nd. The lineup included films by G.B. Jones, Jill Reiter, Greta Snider, and Rick Castro, and offered an insightful (and nostalgic) view of the vibrant underground queer punk scene that exploded in cities like Toronto and New York in the early 1990s.

“Queercore” as a genre is a playful oxymoron, a mashup of two things once considered incompatible: queerness and hardcore punk. It spoke to the many queers who were more at home in mosh pits than on disco dancefloors, but who often felt doubly marginalized by punk’s flagrant homophobia. Befitting its name, the films Nordeen assembled defied comfortable categorization, with elements of documentary, satire, and nonlinear narrative. Greta Snider’s Our Gay Brothers mashed up children’s instructional videos and gay porn clips to interrogate gay men’s attitudes to the female body, while Jill Reiter’s Birthday Party reimagined a girl’s “sweet sixteen” as thrown by her drag queen mother and some guest strippers. The Salivation Army was a gripping documentary about the Toronto gang by the same name that filmmaker Scott Trealeven helped found, whose widely-read zine helped spark the formation of a dangerous cult network of queer skinhead punks. G.B. Jones’s The Troublemakers followed a group of unruly shoplifters from supermarket aisles to a condemned house, the camera work spiraling out of control as the characters come under surveillance. The funniest film was Rick Castro’s Dr. Chris Teen Sex Surrogate, which featured Vaginal Davis and Bruce LaBruce as “drag queen lesbians” having marital problems who invite a Freudian sex therapist over to spice things up.

Watch the trailer for The Troublemakers: